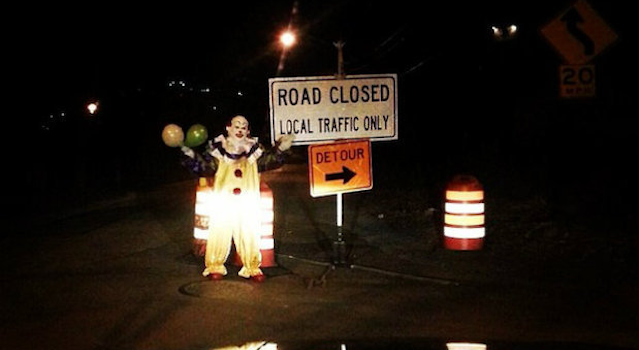 It looks like the Northampton clown has emigrated – to Staten Island.

Remember the creepy Northampton clown from a few months ago that would walk around Northampton spooking people out and generally being quite weird? It looks like he’s emigrated to Staten Island.

Residents of Staten Island (eww) have been taking pictures and videos of the clown clowning around in the street over the last few days. He wears a yellow outfit, red shoes and a mask and is always seen holding balloons and often waving towards the camera.

I don’t know where any of these places are, but in case anyone from Staten Island is reading he’s been spotted near Grasmere and Richmond Valley stations at night as well as outside a Chinese restaurant during the day on Richmond Avenue.

Most of the reactions to the clown have been ones of pure terror and there’s no signs of him being tracked down any time soon. One dude called Michael Leavy who posted a picture on his Instagram account stated: ‘I wish I was joking dude, it scared the heck out of me. I  thought it was like some dummy or cardboard standup thing at first until he pointed at me.’

Chilling. If you’re visiting Staten Island any time soon I would say don’t bother (and not just because of the clown), but if you absolutely have to go there then make sure you watch out for this fucker as there’s no telling what he’s up to.

â˜› More Clowns: A Guy At Gathering Of The Juggalos Cut His Nipple Off For $100 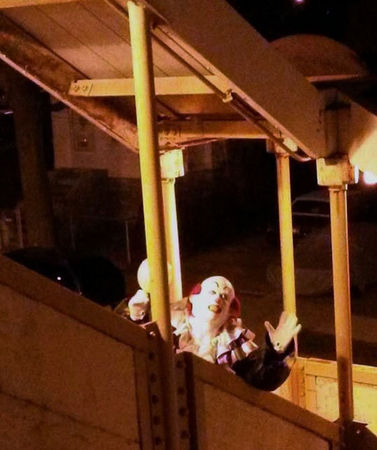