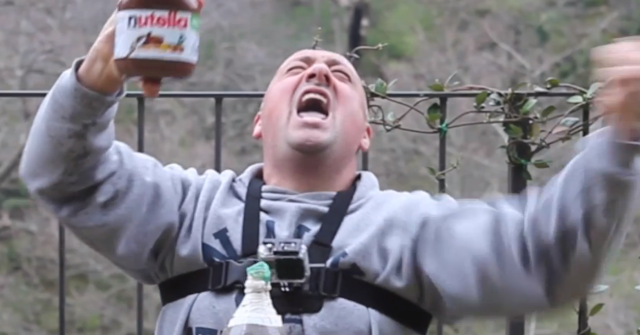 This new incredible experiment really has to be seen to be believed.

I don’t know who this Italian guy is and I can’t understand what he’s saying but his energy and passion is off the chain – especially when he’s just doing something stupid like putting mentos in a coke bottle and watching the explosion – that he completely nails this video and makes it.

All he does is put mentos in a coke bottle – with the added ingredients of a condom and Nutella – and watch it explode but his reaction is priceless. The mentosaurus as it’s so been christened is pretty awesome too, but it’s all about the dude in this video.

Here’s a translation of what the dude’s saying: ‘New, incredible experiment with Coke and Mentos! But we’re gonna try something new today: the energy and vitality of Nutella! And as always, we’re gonna use a condom, but this time it’s gonna be mango-flavored. Let’s start. First thing: let’s take some Nutella and put it on the top of the bottle, creating some kind of Nutella cap that will be fundamental for the Nutella-Coke-Mentos reaction. Good, now we open our condom and we put Mentos in it. Not just one, two or three, but five Mentos, since we found out during previous experiments that 5 is the best quantity of Mentos in terms of maximum reaction.’