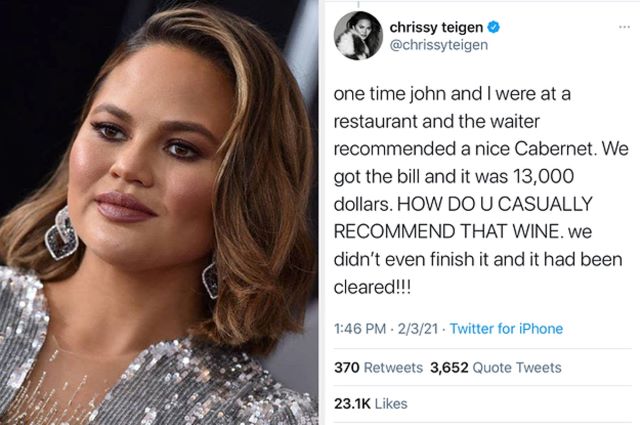 How did she not see this coming?

Chrissy Teigen is pretty well known for not thinking before she Tweets, but also for ripping into trolls who try to cuss her and her husband John Legend, so fair play to her on that least.

Well she put her foot in it again this week after sharing a story about the time she and her husband were in a restaurant. Here’s what she shared:

one time john and I were at a restaurant and the waiter recommended a nice Cabernet. We got the bill and it was 13,000 dollars. HOW DO U CASUALLY RECOMMEND THAT WINE. we didn’t even finish it and it had been cleared!!!

Did Chrissy have to share this story about accidentally ordering a $13,000 bottle of wine that she didn’t even finish while answering her own question about the most expensive thing she’d accidentally ordered? Of course not, but big deal, right?

Well, as expected, a whole bunch of people got mad at her about it and started giving Teigen so much shit that she began trending on Twitter:

Did you recover? Meanwhile people are out here drowning in debt, losing their homes, and can’t afford to see a doctor.

People are not going to relate to this.

damn sounds minorly annoying. i wonder if anything else is going on right now that might, say, throw that experience into extremely sharp relief. probably not i guess. keep up the great posts 👍

is someone forcing you to tell the world these things

Have to admit, that was a pretty wild move by the waiter to recommend a $13,000 bottle of wine without mentioning the price, and that is a pretty crazy story you’d want to tell people. But nope everyone just found it annoying and tone-deaf and weren’t happy because they couldn’t relate. Well obviously you can’t relate, you’re not a multi millionaire model married to a multi millionaire singer who dines at restaurants that sell $13,000 of wine. I’m not a fan of hers or anything but come on, give the gal a break!

Chrissy later responded to the criticism:

hey, not everything I say on my twitter is going to be relatable to you because it is my life and my twitter and my stories. I see your tweets, I get your jokes, you are so funny, yes, you really nailed me

Fair enough really. Can’t be expected to think about the forgotten and the depraved and the poors 24/7 when you’re one of the most privileged people on the planet. Let Chrissy live, everybody!

For the time Chrissy Teigen deleted 60,000 Tweets because people were accusing her of being part of a child sex trafficking ring, click HERE. The hell was all that about?