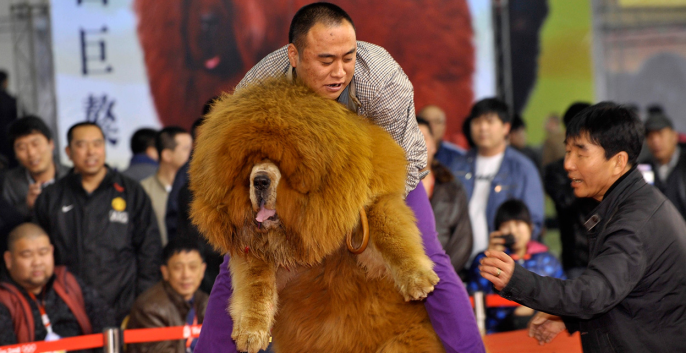 Man’s best friend has to stand in for Aslan at a zoo in the People’s Republic. Things do not go according to plan.

Like the song says: “You can’t always get what you want”. Some people would really like to win the lottery or meet their soulmate but have to make do with £10 off a scratchcard and a beer goggles shag. Others would like to see a lion at the zoo but instead must substitute the King Of The Beasts for a very large dog.

A zoo in the People’s Park of Luohe, located in the central province of Henan, is one such place where dreams can – and very often do – go unfulfilled. The site is notorious for replacing exotic animals with more common species but their latest scheme backfired in spectacularly comedic fashion when an animal in the “African lion” enclosure started barking at visitors.

It turns out that people had paid 15 Yuan (or £1.50) a pop for the privilege of animal duplicity, though at least the zoo’s staff tried their best to find a canine that was as Lion-like in appearance as possible; an adorable Tibetan Mastiff.  D’awwwww. To be fair, if you squint you’d almost think it was a lion;

And it turns out the zoo’s deceit is not just confined to lions. Other shoddy substitutions include another dog in a wolf pen, two rodents in a snake’s cage and perhaps most amusingly of all, a white fox in a leopard’s den.

The zoo did its best to instigate some sort of damage control by insisting that yes it DOES have a lion actually, it’s just at a breeding facility. The dog was just keeping his spot warm, or something along those lines.

Customers, however, were having none of it and accused the zoo of trying to shaft them. As one of them wisely observed via social media: “They should at least use a husky to pretend to be a wolf.”

And lastly, purely because we feel like it, here’s a video of some Tibetan Mastiff puppies. Prepare for a cuteness overload so powerful it might make your head explode like that guy in Scanners;