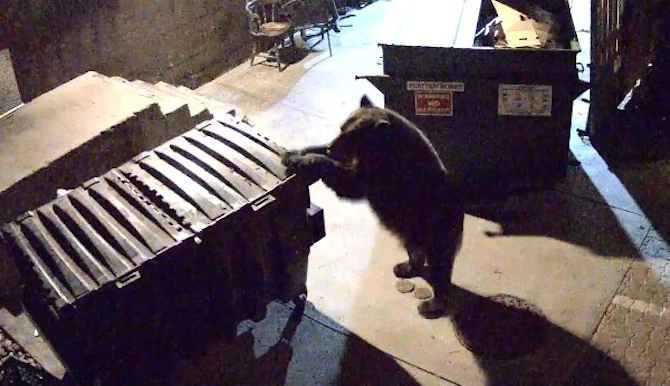 Bears are super scary and they just got even scarier now that they’re super smart too.

If this is real then it’s off the chart. I know bears are pretty big scary animals that would totally kick a little human like me’s ass, but I had no idea that they were also really intelligent and could do normal things like push a dumpster of food away from a restaurant. If this is real then we’ve got a lot to worry about because it probably won’t be too long until bears overthrow humans.

I say it might not be real because the bear does kinda look like a guy in a suit when he’s pushing the dumpster, but it’s all over the internet and there are interviews with the restaurant’s owner who seems to think it’s real so I think it must be legit. It’s nuts though and pretty freaking scary how this bear is so smart it just bypasses the recycling dumpster and goes straight for the good shit. Apparently the place serves a real good schnitzel and that’s what the bear was after.

Take a look at the awesome/slightly terrifying video below:

Bears Fired Out Of Planes At Supersonic Speeds