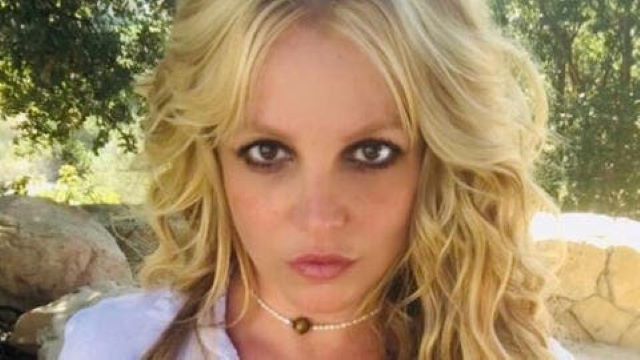 If I was trying to convince the courts that I was perfectly sane enough to control my own life and finances, I probably wouldn’t keep posting pics of my boobs online alongside massive rambling captions. That seems to be Britney’s approach though as she battles her conservatorship, even though she said she was going to ‘post less‘ on social media just a few days ago.

That said, there’s a total of 8 slides in this thing that I suggest you click though, you know, for research purposes…

The caption on her photo is just wayyyy too long:

No guys … I didn’t get a boob job in just a week … nor am I pregnant … I have boobs in these pics cause I devoured food 😋 !!!! Before I show you more pics of my body … I want you to understand my thoughts on exposing my skin !!!! In my opinion it’s quite twisted the immediate response of when any woman is hot and they want to shed a layer … no … I’m not talking in a strip club or a performance … just on a practical scale of being in your car and realizing you’re wearing a stupid long sleeve shirt in the summer !!!! The immediate reaction to any woman who does this after shedding a layer is DAMN I FEEL BETTER … therefore you think you look better !!! I’ve had a billion shows where I’ve done that and to my horror uhhh we’ll … sometimes I didn’t look so great … TOO MANY TIMES and it’s embarrassing as fuck but in my imagination it felt great !!!! I mean I don’t want anybody to see the big dimple on my ass but I feel like performing made me too self conscious about my body and that’s not attractive ….. anyways I bet you’re wondering why I’d expose my body NOW … well it’s because I was born into this world naked and I honestly feel like the weight of the would has been on my shoulders and it’s made me view myself that way !!!! I wanted to see myself in a lighter way … naked … like the way I was born and to me looking back at my pictures when I shoot it’s insane the psychology in seeing myself in my purest form gives evidence that pain … hurt … tears … and heavy burdens aren’t who I am. I am a woman …. a beautiful … sensitive woman who needs to look at myself in my purest form !!! No … I’m not going to do topless pics for the rest of my life cause that would get boring but it sure as hell helps when you need to be enlightened 🤷🏼‍♀️🤷🏼‍♀️🤷🏼‍♀️ !!!! And I will admit the FREE BRITNEY comments after I took my shirt off were actually really fucking funny !!! The Free Britney campaign started with all your amazing pink Free Britney shirts 👚 3 years ago !!! There’s a way deeper meaning to the movement than you can ever imagine … my fans have always been so damn amazing and I love you all 🌹🌹🌹 !!!! Psss this was shot on holy Sunday yesterday ✨ !!!!

Sigh. As I’ve said about the previous ill-advised photos she’s been sharing on Instagram, Britney really needs to chill out a bit. I think all this support for the #FreeBritney movement has gassed her up so much that she thinks it’s only a matter of time before the conservatorship is lifted, and so she believes she can behave any way she wants and it won’t affect the outcome. The courts are gonna get wind of these photos and even them against her. What about that does she not get?

As much as she’s shooting herself in the foot, I think we can agree on is that the details of her conservatorship are incredibly f*cked up and something needs to be done about it ASAP. #FreeBritney indeed!