He utilised Twitter to its maximum potential and it could lead to a whole new era of customer complaints.

Earlier this week, British Airways lost a guy called Hasan Syed’s dad’s bags and Hasan Syed was mighty pissed off about it. We can all relate – there’s nothing worse than when you’re waiting at the airport for your bags to come through the carousel and they don’t show up and you find out they’ve been sent to Tokyo rather than San Francisco.Then you’re on holiday for a couple of days without any of your stuff before your bags finally get returned and you’re pretty narked off about the whole situation. It sucks and shouldn’t have happened.

Hasan Syed didn’t just get mad like most of us would though, he decided to get even. Appalled by British Airways’ customer service, he decided to write a tweet publicly shaming them and then purchase a series of promoted tweets via Twitter’s self service ad platform in two major markets – New York City and the United Kingdom. You can see the tweet below.

@BritishAirways @British_Airways is the worst airline ever. Lost my luggage & can't even track it down. Absolutely pathetic #britishairways

Over the next 24 hours, the tweet was seen by roughly 77,000 people and this cost Hasan roughly $1000. Hasan didn’t seem to care about the costs though as he stated cooly and calmly: ‘I got what I wanted. I win’

I got what I wanted. I win.

British Airways eventually got back to Hasan via Twitter and their responses completely validated his actions. Check this out for completely retarded customer service. I hope whoever is running social media for them got fired today and they’re seriously thinking about updating their social media policy. 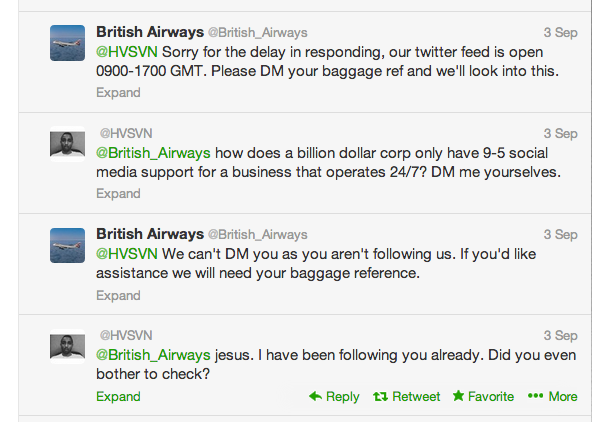 A British Airways statement released later on yesterday stated that they had eventually managed to contact Hasan, and that his father’s baggage had been found and would be returned to him shortly. Too little too late guys, the damage has already been done. It’s already well known that British Airways is one of the worst airlines to fly with and this incident hasn’t done anything to enhance that reputation.

In fact at least 77,000 people – and whoever reads this – are going to think they’re even more useless than they were before. Hopefully this becomes a new method of customer complaints as it completely kicks ass and we might finally see some of these big shot companies finally pull their fingers out of their asses.