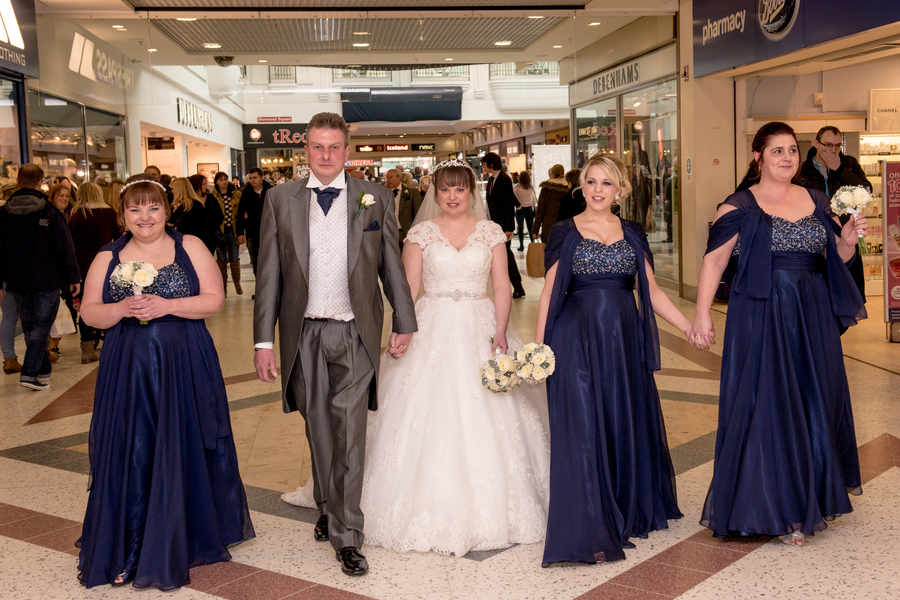 Finally, Telford is famous for something.

In what’s being called the first wedding of its kind in the UK (depressingly it seems that this has already happened in other parts of the world, probably Florida), Mike and Kate Davies from Telford have tied the knot in the shopping centre where they met and both continue to work after a whole year’s worth of preparation.

The shopping centre featured massively in the wedding, as Kate had her hair done in the House of Fraser and her makeup done in Debenhams. She then had her dress fitted in the management suite before making her way to the centre court of the complex, where husband to be Mike had been nervously waiting as she was half an hour late.

40 guests were officially invited but many shoppers and friends of the couple who worked in the centre stopped whatever they were doing – especially if they were supposed to be working – to take in their nuptials. Most of them agreed that it was really unique and sweet, although I’m sure most people reading this will think that it’s the most cringeworthy and tacky idea ever. 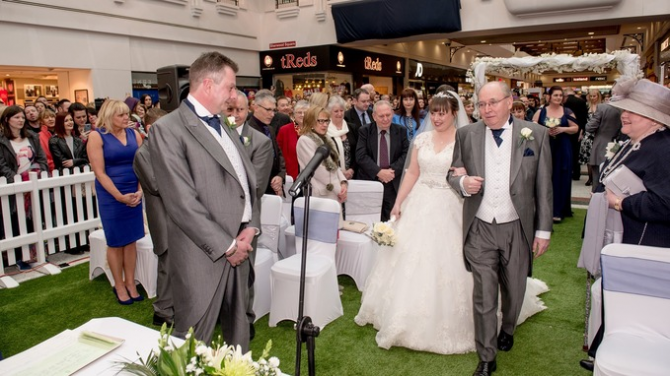 Kate explained why Telford Shopping Centre (it doesn’t even have a good name) meant so much to them and why it was the only place they could realistically think to have the wedding:

I’ve worked here for 11 years and Mike’s been here for 10 after he joined the maintenance team, so we’ve known each other for a long time. Over the years that turned into something special that was always associated with the centre, especially as we’ve both continued to work there.

I used to see him with all his dirty work gear on and I liked that. To me he was just a real man. We’d see each other every day — and he did use to pop into Debenhams to put a quick squirt of aftershave on before he’d come to see me.

To be honest I was sceptical when I heard about his that it was even true, because it sounds like something that might appear on The Daily Mash or some other satire site about people in new towns being backward, but there’s a video and pictures of the big day so I can confirm it is 100% true. Fair play I suppose – it’s at least better than having your wedding reception in McDonald’s because it’s your favourite restaurant or Photoshopping pictures of your wedding because it’s so terrible. But only just.