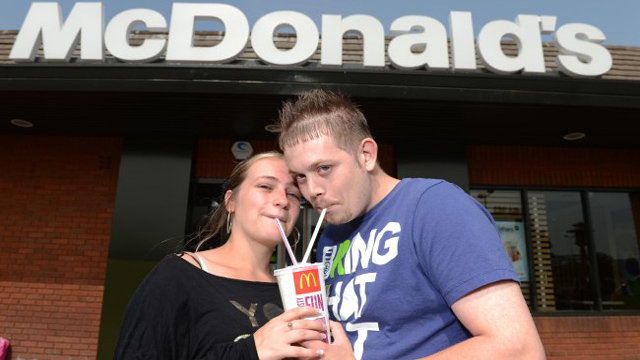 Bristol couple, Steven and Emily, have decided to go large and have their wedding reception at McDonalds. What is the world coming to.

Come on, when you think wedding your mind must immediately go towards a Bic Mac and fries extra value meal, yeah? I mean, can you honestly tell me that you think there is a better way to say let’s celebrate spending our lives together than a good old limited edition Oreo McFlurry? Well, you might think this is mental but Steven Asher, 27, and Emily Marshall, 20, have decided to take the leap and celebrate at  the bride’s favourite eatery as they fancied something “difrent.” (that’s not a spelling mistake more her likely grasp on the English language).

The pair hail from Lawrence Weston (which is basically a part of Bristol that looks like Mad Max 2, just a bit shittier and less budget and thought went into it than the first Mad Max film, and slightly less anti-Semitism), and have set their sights on the local Cribbs Causeway eatery after staff agreed to cordon off a section of the restaurant just for them.

They picked the golden arched fast food giant as it is wife-to-be, Emily’s favourite place to dine and she has told papers that she “eats there twice a week when she can afford it.” 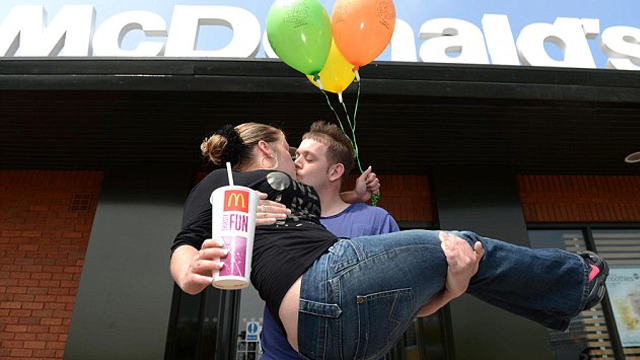 The romance between the couple and McDonalds stretches across the epoch of time, however, the couple only made their beginning not too long ago. The courtship began, as many do, when Steven’s mate asked him if he wouldn’t mind taking Emily home from a night out on the tiles (probably literally). One thing led to each other and the Bristol-born lovers took it up a notch in the back of his L reg Ford Mondeo (allegedly). A bit of time on and Steve burped the inevitable question out of his mouth in the most romantic way he could think:

“We could get married.” To which the princess of our tale replied, “You what?” and it apparently went from there.

Approximately six months on from Steven’s proposal (which neither can remember really very well) they are now going through the process of agreeing the party with the McDonald’s staff. The main worry is whether or not they will be able to toast the day with an alcoholic (most likely Lambrini) drink for the guests. I feel awful for them because if they aren’t gonna be able to have a drink then what is Emily’s two-year old daughter Lily-Rae supposed to have – she loves drop of cherry Lambrini with her besties 4eva mwah mwah.

The wedding is due to take place at Bristol Register Office on Saturday 27th July; and if you are just lucky enough you might catch a glimpse of the couple getting whisked off to Cribbs Causeway McDonald’s in a limousine, before they end the night at Avonmouth Working Men’s Club, O Steven – you shouldn’t have.

The guys at Sick Chirpse invite you to join the happy couple in celebrating what it means to truly be a waste of a person.

Emily, who was speaking to local Bristol journalists regarding what will hopefully be the greatest day of her life, had this to say:

“One of my friends sent me a message on Facebook saying, “Are you mad?” but it’s just something that we really like. I’m not worried about people staring at me – you’re meant to be the centre of attention on your wedding day, aren’t you?”

Well, you might as well go to a Burger King and get matching BK crowns you idiot.

We thought we’d end it on a quote from Steven, who is next in line to be the Dalai Lama:

“A lot of people have asked, “McDonald’s? Why?” but we reply, “Why not?” – it’s something a little  different, and we like to do things a bit differently.”

Yeah, it’s really different, you moron. Good luck raising Emily’s kid with her, hopefully they find out who the dad is one day and he might take some of the burden off. Tennent’s Super all round then. I’m lovin’ it.