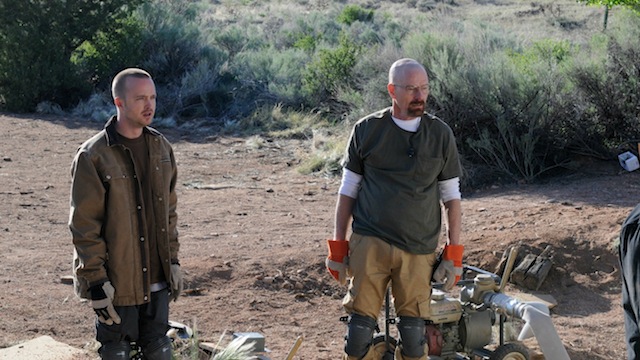 After five and a half years of watching Heisenberg grow into Albuquerque’s greatest meth cook, Breaking Bad is coming to an end, here we guess at how it will all go down.

It’s really here, the end – of Heisenberg, blue meth and “bitch” being used as the ending to a sentence. Five years after we first saw Walter White running from an RV in the middle of the desert in his underwear, the last episode of the fifth season is upon us. Breaking Bad comes to an end tonight (or Monday, depending on whether you’re the sort of person who waits up till 2am to download it). We’ve spent many stoned weekends arguing over the merits of crystal meth production, getting munchies for Los Pollos Hermanos chicken, feeling sorry for Jesse Pinkman and thanking whatever gods may or may not exist that Junior is not related to us.

All good things come to an end though, and what an end it’s going to be, so let’s just take a moment to guess how one of the greatest shows on TV might come to a glorious end in its 62nd, and final, episode…

Firstly however, watch this video of all the bad shit that has happened to Jesse Pinkman, it’s not an early download link to the final episode, but it’ll keep you going till tonight/Monday we’re sure: