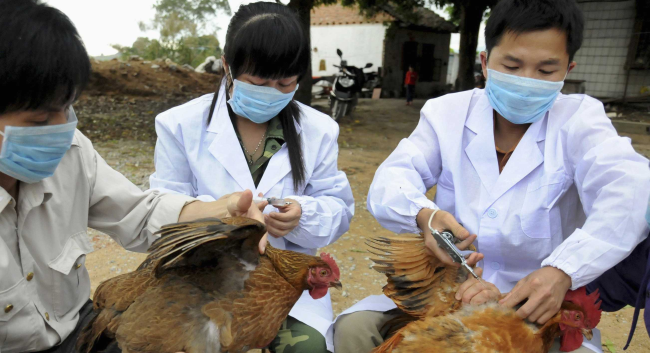 The feathered spectre of the apocalypse looms ever closer to humanity. Sort of.

While we here at Sick Chirpse by no means wish to instigate some kind of global panic, we couldn’t help but notice a troubling story on the megaweb this morning. It’s the sort of story that makes us want to conserve canned food and shotgun ammo while marking fresh water supplies on a map. The British Medical Journal is reporting the first ever case of human-to-human transmission of the H7N9 virus, better known to you and I as bird flu. The disease itself is nothing new but up until now it was believed the only way to catch it was in direct contact with birds. Not anymore. Gulp.

The journal reports that a 32-year-old woman in China had become infected in March after caring for her 60-year-old father in hospital. He had visited a poultry market shortly before he became ill, though his daughter hadn’t. Regardless, six days after her last contact with him she fell ill. Both died in hospital of multiple organ failure. Important medical dudes did some tests on both patients and found that strains of the virus were almost genetically identical, meaning the daughter was infected directly from her father rather than another source. Oh Christ.

â˜› While We’re On The Subject: Here’s How The World Will End

But there’s no need to make peace with your God just yet, as health officials tested 43 close contacts of the patients. All of them tested negative for H7N9, which suggests the virus’s ability  to spread is, at best, limited. Researchers pointed out that while though was no evidence to suggest the virus had gained the ability to spread from person to person efficiently, this was the first case of a “probable transmission” from human to human. Hmmm. Closer to home, Dr James Rudge, of the London School of Hygiene and Tropical Medicine, stated the ever-so-slightly obvious: “It would be a worry if we start to see longer chains of transmission between people, when one person infects someone else, who in turn infects more people, and so on. “And particularly if each infected case goes on to infect, on average, more than one other person, this would be a strong warning sign that we might be in the early stages of an epidemic.” Have a nice day! In  less-distressing bird-related media, here’s an old ad for Cadbury’s Mini-Eggs starring our favourite feathered friend, Mr Cadbury’s Parrot: â˜›  Further Bird Fun: Man Turns Dead Ostrich Into Helicopter