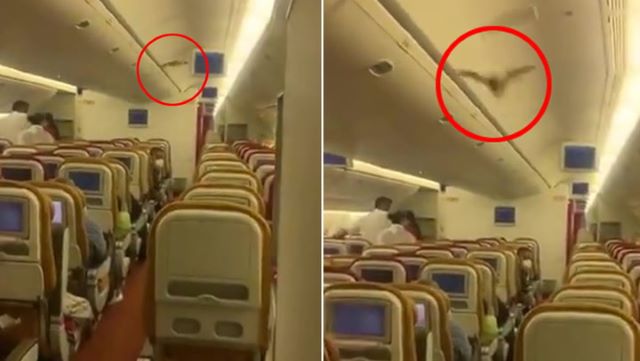 The last thing we need is more bats going viral.

It’s been non-stop drama in the aviation world since airports returned to relative normality, but instead of people beating the crap out of each other mid-flight, this week we have a plane being forced into an emergency landing after a freaking bat began soaring through the aircraft.

As per AOL, the stowaway passenger was spotted on board a 15-hour Air India flight from Delhi, India, to Newark, USA, and kept flying in agitated circles through the cabin of the Boeing 777:

Just half an hour into the long-haul flight, the pilot was advised to turn around and make an emergency landing. This meant that an hour and a half after taking off from Delhi at 2.20am, passengers found themselves grounded back in the Indian capital city when the plane landed at 3.55am. How annoying!

When wildlife experts boarded the plane to retrieve the bat – guess what? It was found dead in the Business Class section. Which I guess means they may as well have just continued the flight as planned but then again, you can never be too safe these days. I mean India is already having a bad enough time with COVID as it is (surprised they’re even allowing flights into America), the last thing they need is a bat wreaking havoc inside one of their planes. Ts and Ps to the passengers on board and let’s hope the rescheduled flight was more pleasant.

To watch an Indian couple hold a mid-air wedding with 160 guests to get around lockdown rules, click HERE. Couldn’t pay me to get on that flight.