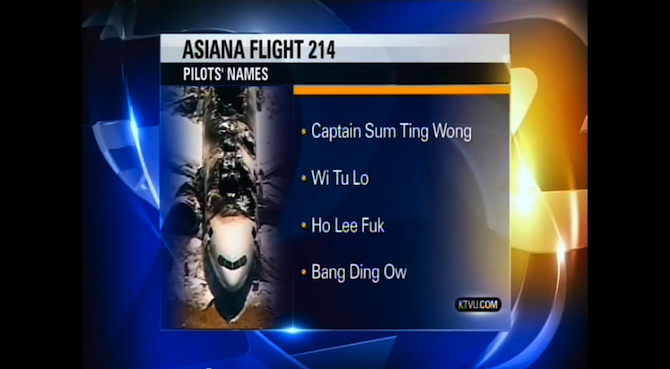 A TV station made an excruciating error in reporting the names of the crash pilots on Asiana Flight 214, and now the airline is planning to sue.

What’s in a name? We’ll tell you what’s in a name – the writing on the wall. Everything you need to know about someone is in their name, as we’ve recently discovered. For example, if a girl’s name is Destiny, you know she’s probably quite an enthusiastic dancer. If a guy’s name is DeShawn, he’s probably faster than you. And if the captain of your flight is called Sum Ting Wong, then your plane is crashing out of the sky every time.

Stick him in the cock pit with Wi Tu Lo, Ho Lee Fuk and Bang Ding Ow and you have a real recipe for disaster. Poor crew selection by whoever is in charge of these things at Asiana Airlines.