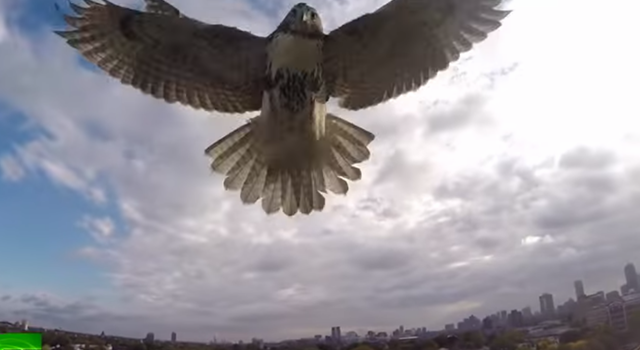 Who’s harder, a hawk or a drone? There’s only one way to find out…

I watched a bunch of videos the other day where people strapped GoPro cameras to birds of prey and let them go about their business whilst beaming back impressive aerial shots. The footage certainly is cool, but I can’t work out whether it’s cruel or not? Whatever. But today I came across the video below and the shoe is very much on the other foot.

We’re in Massachussets with Christopher Schmidt who’d been flying his Phantom FC40 quadcopter drone around the city’s Magazine Beach Park. Basically showing off I guess.

For whatever reason a juvenile red-tailed hawk did not take kindly to the drone’s presence at all. In fact it decided it was going to smash the thing to bits for encroaching on his air space. The hawk attacked, the drone crashed and burned. That’s Nature: 1, Showing Off: zilch. Good on you wildlife.

To be honest eagles are pretty gnarly most of the time, when they attack they always go balls out (except they don’t have balls). I wonder if the people of Syria could train a legion of hawks to attack and destroy the US drones that are running amok over there?