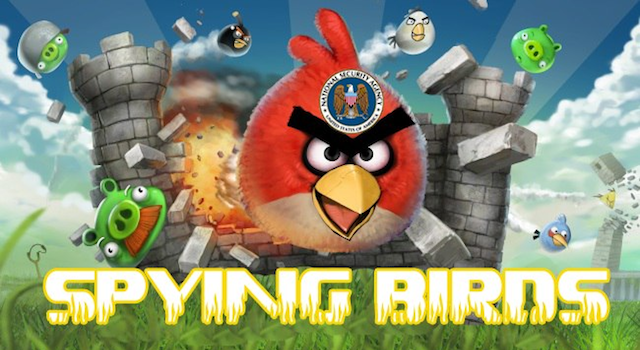 The Angry Birds website was hacked after the publication of leaks that alleged that the NSA and its British counterpart GCHQ had obtained user information through the app.

The Angry Birds website was hacked after the publication of leaks that alleged that the NSA and its British counterpart GCHQ had obtained information from at least one of its Finnish developer Rovio’s games. The hackers changed the lead image on the website to what you can see above – changing Angry Bird to Spying Birds and whacking an NSA logo on the forehead of the lead bird.

The leaks were published in several major newspapers on Monday and were – of course – courtesy of Edward Snowden. They detailed how the NSA and GCHQ had worked together since 2007 to figure out ways in which to spy on people and obtain their data through the apps on their phones and tablets, and in a GCHQ report from 2012 it is detailed how they can specifically snatch data from people if they have Angry Birds installed on their phone.

It was said that they could obtain data about the user’s age, sex and location from this, as well as what music they were listening to (useful) or if they were making a call. The acquirement of this information often depended on which online advertising network Rovio would send the user’s details to following their use of the app.

Rovio on their part have done their best to fix the hack and distance themselves from accusations that they are in league with the NSA/GCHQ and selling peoples’ information. They quickly fixed the lead image on the site and released a statement expressing that they did not collude or collaborate with any government spy agency anyway. But even if they did you would expect them to say that so it doesn’t really mean anything.

They also posted a blog attempting to reassure people over this, saying that they would reconsider sharing data with partners following this incident:

‘As the alleged surveillance might be happening through third-party advertising networks, the most important conversation to be had is how to ensure user privacy is protected while preventing the negative impact on the whole advertising industry and the countless mobile apps that rely on ad networks.In order to protect our end users, we will, like all other companies using third-party advertising networks, have to re-evaluate working with these networks if they are being used for spying purposes’.

The marketing manager for Rokio –  some broad called Saara Bergstrom – offered the following explanation for the hacking:

‘The defacement was caught in minutes and corrected immediately. The end user data was in no risk at any point. Due to how the internet name resolution works, for most areas it was not visible at all, but some areas take time for the correct information to be updated. This attack looks to be similar to the New York Times attacks from last year’.

The attack she referred to was one by those troublesome tykes the Syrian Electronic Army, but their Twitter feed denied that they had pulled off this stunt and instead credited a friend. This is probably true as they normally take great delight in bragging about how they have fucked up major news outlets.

A friend hacked and defaced @Angrybirds website after reports confirms its spying on people | http://t.co/FrUZaYLumH

The attack was by “Anti-NSA” Hacker, He sent an email to our official email with the link of the hacked website.