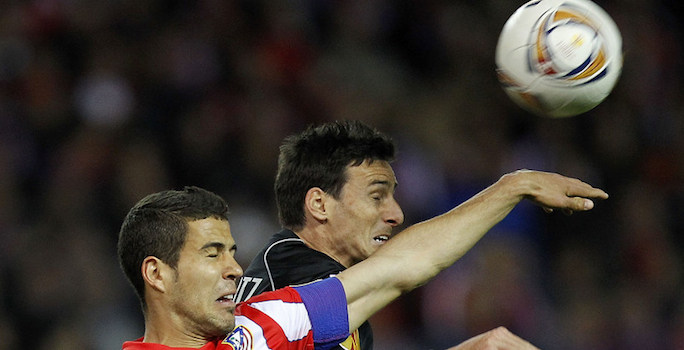 This has got to be a new world record for stupidity as Alvaro Domniguez gives away two penalties for handball in 40 seconds of game time.

People are talking about this like it could be a world record – or at least some kind of record – and I’m inclined to believe them because it’s pretty crazy and I don’t think I’ve ever heard of anything like it before in all my years of watching football. Sure, I’ve heard of a penalty being given and then saved and then another penalty being given – that is super rare to be fair though – but I’ve never heard of a player giving away a penalty, the penalty being saved and then THE EXACT SAME PLAYER giving away another penalty for the EXACT SAME OFFENCE immediately.

Until now that is and it’s pretty buts right? The scene was set for the opening of the Bundesliga last night and defending champions Bayern Munich were playing against Borussia Monchengladbach in the opening match. With the game critically poised at 2-1 to Bayern, Spanish Gladbach defender Alvaro Dominguez decided to give away a penalty. Actually in fairness it was pretty unlucky as the ball hit his his knee and then bounces up and hit his hand, but I think you’ve got to give it in that situation because it is messing up the flight of the ball, even if it’s unintentional.

Thomas Muller stepped up to take the penalty and it was saved by Ter Stegen and there was a bit of a rebound scramble and Alvaro Dominguez decided to handball it again and ANOTHER penalty was given. What an absolute stinker that guy is having huh? Tomas Muller thought better of taking the penalty this time and instead handed it over to chief penalty taker David Alaba – who probably should have taken the first one and promptly slotted it away.

Bayern Munich went on to win the match 3-1. Alvaro Dominguez offered the following via Twitter as an explanation for his behaviour:

Just to say that the first penalti hit my leg before rebounding into my arm and the second is with the shoulder, not arm… Ridiculous

Unlucky pal. I guess sometimes it just doesn’t go right for you when you’re a professional footballer huh? AWAH! Check out the video of the incident below:

Mikael Silvestre Has An Absolute Nightmare On His MLS Debut