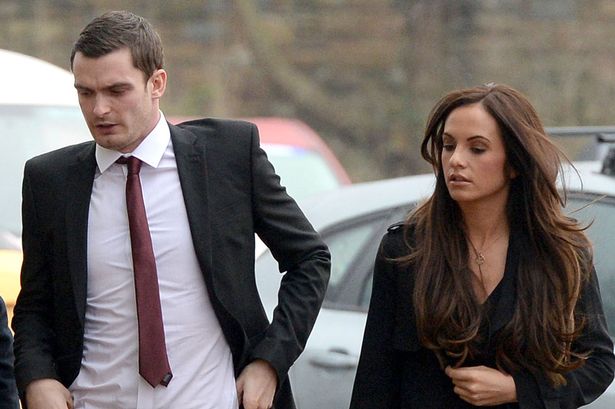 The details of Adam Johnson’s involvement with a 15-year-old schoolgirl are coming out in court at the moment, and let’s just say they warrant a face-palm or two.

If you hadn’t heard, Johnson pleaded guilty to child grooming and one count of sexual activity — kissing — with a minor.

The prosecutor read out some of their 834 WhatsApp exchanges in court yesterday— include these:

Adam Johnson (AJ): “Are you in the last year of school?”

Schoolgirl (SG): “Year 10…will you still send me a signed shirt”

AJ: “Yeh, I will send you one or sign yours. Whatever you prefer”

AJ: “Yeh, I can do. Do you want me to sign yours at the game or meet up? Whatever you prefer”

SG: “I don’t mind. Good luck with the city match”

When discussing New Year’s Eve plans on December 31 last year, the teenager told him she was going to a family party, the court heard.

She adds that she would be 16 in November.

The court heard the pair first met up on January 17th, when he handed her a signed shirt.

AJ: “I thought I would have got a thank you kiss for the shirt”

AJ: “I will get this thank you, it had better be worth it”

AJ: “Confident aren’t you? Am I only getting a kiss?”

SG: “Depends on what else you’re after”

AJ: “I dunno, it depends what you are up for.. a little bit more than a kiss”

AJ: “A bit of feeling. Just see. No pressure. Lol”

They next meet on January 30th when the sexual activity allegedly took place in the car park behind a Chinese takeaway. Afterwards they exchange more messages.

AJ: “Think we better go in the back next time.”

AJ: “It was class. Just wanted to get your jeans off”

The prosecution said just 30 seconds earlier he received a picture from girlfriend Stacey Flounders of their new baby daughter and replied: “She looks class.”

The court heard how Johnson messaged the girl at 5.22pm on January 30th:

Then 20 minutes later he received a message from Stacey, his girlfriend, saying: “Hey, I’m going to try and not be negative with you and believe you more.

“But if you are doing stupid stuff then you need to stop and think about us. It would be a shame to spoilt it now. I really want us to work because we are a family and we now have Ayla.”

Johnson did not respond to her message “because he was engaged with the girl” the jury heard.

Yikes. Good thing Sunderland have sacked him because there is some prime piss-take material in there for the rest of the squad. Can you imagine being a 28 year old man and texting a 15-year-old this shit? Not that any of it is really funny or that locker room banter is anywhere near the list of his worries right now.

For our run-down of top 10 footballer who need a smack in the face (Adam included) – click HERE.