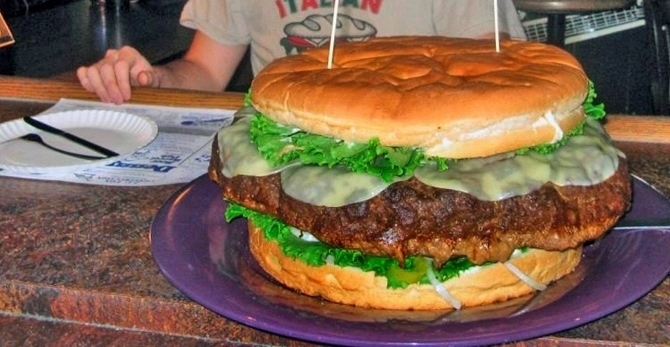 A guy demolishes an eight pound burger challenge, but the restaurant owner gets pissed off and his friends ain’t too happy about it.

Okay, so I’m a pretty shitty eater and that’s probably why I get blown away like a kite when it’s a windy day and it’s probably why I have to sit in high-chairs in the office/pub/a restaurant because if I was to sit in a normal chair I’d slide through the slits and would get sucked up into the air ventilation system. I mean, I struggle with a lotta meals and have to be mega hungry to completely finish anything that’s put in front of me. I don’t really know if that’s a bad thing, but I don’t really care. What I do know, though, is that it’s not very alpha male and the silverbacks give me stinkers whenever I leave food on a plate. That is, of course, after they’ve thrown it down their gullet and farted their way through the next hour.

â˜› You Eat This Shit?: Fast Food: The Reality

Most of my mates are decent eaters and there’s a few who even sorta pride themselves on their munching ability, to the extent that they’ve put themselves forward – and completed – food challenges, with all of us baying them on like sex addicts in a whorehouse. There’s no winning prize, though. Just the ego-trip of being a food fatty and the irresistible chat-up line (tinged with BBQ sauce and horse meat) of: ‘I ate a piglet’s weight in meat earlier, the trotters got stuck in my teeth.’ I doubt very much that my mates have used that line but I wouldn’t put it past them, seriously. I say all of us baying them on, but really we’re sat there, reserved, frightened, getting old, ugly, balding, with bubbly and ice-cold pints in front of us.

â˜› More Stuff To Do With Pints: This Is Why You Should Never Drink An Upside-Down Pint

The guy you’re about to see is one of those guys with food-eating-pride. Big-time. Now, I say I’m a shitty eater but that doesn’t mean I can’t appreciate watching someone expand and rip their gut while eating some vile, mutant piece of food. Food challenges are always entertaining and this one’s no different. This guy and his buddy have travelled to Reverend Jim’s Road House in Madison, Wisconsin, in order for him to attempt to smash an eight pound burger challenge. When the owner of the restaurant sees the guy absolutely destroying the burger, he gets pissed off and demands that the guy eats absolutely everything, including the horrible bits of food that were left floating in the liquid he’d used to soften the food up. The guy doesn’t really get bothered about it because he’s probably dying for a crap and is hurting inside but his friends get annoyed and a bit of verbal ensues with the owner.

â˜› Could You Eat These? The World’s Most Disgusting Delicacies