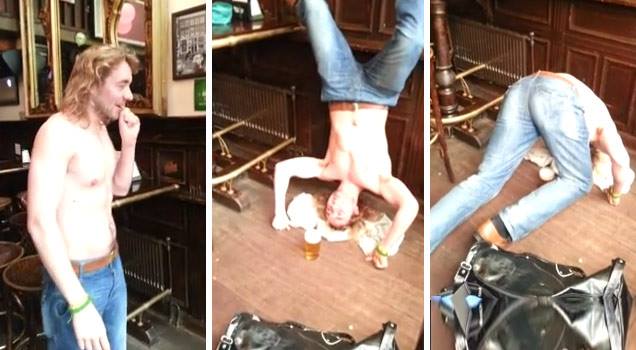 This Irish bloke drinks an upside-down pint but can’t take the heat and faints and knocks himself clean out in a pub.

My guess is that a lotta Sick Chirpse readers ain’t strangers to a messy session in the boozers. I’m guessing this because I love a pint and I’d become an alcoholic if there wasn’t a few things I’d wanna get out of the way first, so seeing that I’m a writer here and you’re a reader here we must have a few things in common that reciprocate our feelings towards life/the world/death, and one of those things is, without a doubt, booze and its counterparts.

â˜› World Booze: The World According To Alcohol Consumption

Mine’s a Guinness and then JD and coke or vodka and energy (the latter depending on whether I’ve been drinking for more than 8 hours) so when you’re at a Sick Chirpse party in the summer come over and buy me a drink and you might be mentioned in an article. I’ll be the guy with the thick Welsh accent, lumberjack shirt and denim shorts on probably, holding up the bar. I don’t really care what you drink as long as it’s not something shitty like Apple Sourz or Smirnoff Ice or Bacardi Breezer or something because if you buy yourself one of them after you’ve bought mine then I’ll probably just walk off and not see you again unless I’ve run out of money and need another drink.

â˜› How To Get More Money: 10 Bets That Will Win You Money In The Pub

Even though mine is primarily a Guinness, it seems the guy in this video is partial to a bit of lager and even after drinking a little bit of the rusty stuff he can’t stand straight. Literally. He’s Irish as well and it’s a bit embarrassing because the Irish pride themselves on their drinking ability but I haven’t met any Irish guy/girl who’s an actual proper drinker. It’s probably all mouth.

If any of you out there have managed to drink/tried to drink an upside-down pint you’ll know it’s pretty difficult and you make a tit of yourself when it’s dripping down your forehead and pooling around your face but I’ve never seen anyone faint and knock themselves clean out after drinking one, which is exactly what happens with this poor Irish excuse: