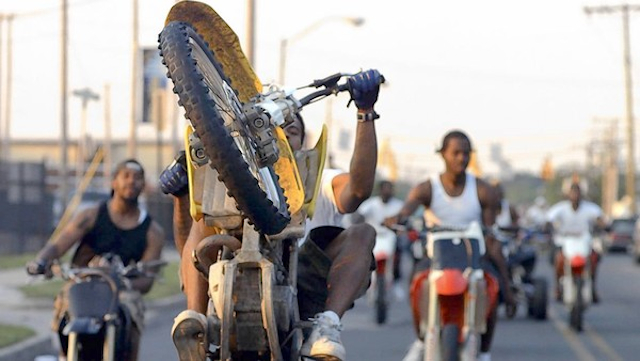 We previewed this documentary about dudes riding their dirt bikes around Baltimore a couple of months ago, now you can watch it in its entirety.

We featured an article about how dudes were riding their dirt bikes around the streets of Baltimore without a care in the world and pissing all the local residents off as well as simultaneously capturing the imaginations and hearts of the world a couple of months ago, and this featured a trailer to the documentary about them.

The gang that started this craze is called the 12 o clock Boys – because they do wheelies on their dirt bikes straight up in the air, you know like where 12 is on a clock – and this documentary follows a young kid who looks about 12 years old called Pug over three years in his quest to join their ranks. There’s also sections with the leaders of the 12 o Clock Boys – a couple of characters called Wheelie Wayne and Superman – and a bunch of awesome shots of guys doing wheelies and all kinds of stunts on their dirt bikes all over the streets of Baltimore, normally when there’s loads of cars and other people around as well. Dangerous.

The documentary is one and a quarter hours long but it kinda watches like an unaired episode of The Wire. It’s well worth watching the next night you aren’t doing anything and you just want to chill out with a couple of zoots and a good documentary. It’s just like being back on the streets of Baltimore with Stringer Bell and Avon Barskdale, only they’re not in it and it’s real.