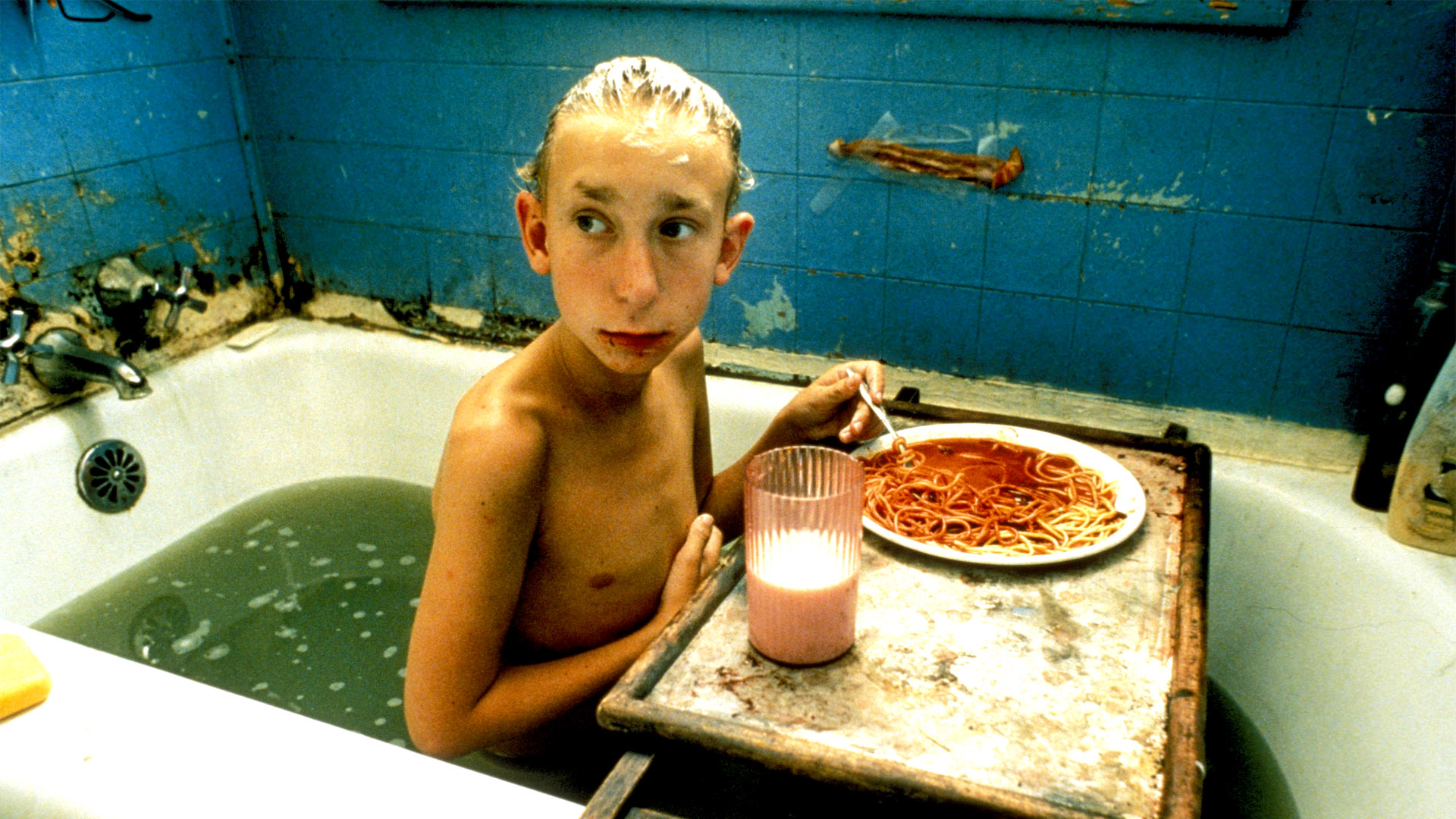 We’ve all heard about disgusting movies before from a weird mate of ours and now Sick Chirpse has compiled a list of ten films that will make you lose faith in life itself.

Finding yourself on the edge? Considering ending it all? Why not watch the films on this list and you’ll probably take the plunge.

We have all had a film recommended to us by a friend in that weird but wonderful way that means you know you’re going to be watching a disgusting movie that is going to wrench out your heart and make you feel sick for a week. The classic “have you seen this film? O, don’t watch it – it’s fucking disgusting.”

Michael Haneke’s Funny Games is a crippling twist on the classic idea of the house invasion thriller. The Austrian film begins with a father, mother and son on their way to a perfect family getaway until two psychotic youths, Peter and Paul, have some very different ideas. Cue sadistic games, voyeuristic thrills and less-than subtle-winks to the audience to let you know that you are part of this vile game. It’ll leave you feeling like you were in on it with the mentally disturbed double act – so you could save yourself the heartache and just watch the American remake starring Tim Roth and Naomi Watts – or watch the original and prepare to deal with a feeling of guilt for the next week or so.

Some of the Sick Chirpse readers may be a bit young for this one and trust me, that is a good thing. The film famed for giving the world the term “Squeal piggy, squeal” will leave a taste in your mouth testament to a hillbilly’s cock. The film plays out in very much the same vein as its most infamous scene and you are left feeling empty and reminded of the horrors of humanity. For the real sickos and the people who don’t want to sit through 110 minutes of a Jon Voight film that isn’t Mission Impossible – you can watch the scene above.

A film that opens and closes with the tagline “Time Destroys Everything” – and you’ll agree if you make it that far. Beginning in a genuine gay Parisian S&M club, Club Rectum, and finishing by making you feel like someone has taken you to that club – this tour de force of horrific French cinema will have you clutching for the will to live. Taking in the events across one traumatic night in Paris, in reverse-chronological order, the beautiful Alex (Monica Bellucci), has her entire world brought down around her after bumping into a stranger in an underpass. As if the horrendous content wasn’t quite enough the director chose to play a background noise throughout the first 30 minutes of the film with a frequency of 28Hz (low, almost inaudible), similar to the noise produced by an earthquake. It causes nausea, sickness and vertigo in humans and caused many people to faint, be sick or leave the cinema when the film first aired.

The original psychodrama to say the least. Gozu is centred around a Yakuza enforcer who is ordered to secretly drive his beloved colleague to be assassinated. But when the colleague unceremoniously disappears en route, the trip that follows is a twisted, surreal and horrifying experience. Whether its smashing a little Chihuahua to pieces, being pursued by a woman with a penchant for lactation or the minotaur head (gozu) that the movie centres around – we can guarantee that you will find this perverse movie a lot more sickening than Miike’s usual bag even if  that includes Ichi The Killer.

I’m not entirely sure how Blue Velvet managed to beat Eraserhead into the top ten, in fact when I finished this article, I considered going back and changing it – then I watched the Dennis Hopper sex scene again. Fuck. If you ever wake up and think I’d really like to watch a man who is violently struggling with respiratory/mummy issues to the extent where he will repeatedly scream mummy into a woman’s vagina whilst inhaling giant panicked breaths of oxygen through a mask before chewing on blue velvet – then you need therapy, and to watch this film. Lynch at his finest.

It’s no secret that Lars Von Trier is a real sick and depraved bastard. The film opens to one of the most beautifully shot scenes I’ve ever witnessed in cinema, however, this is in stark contrast to the horrendous reality of it as it sets the tone for one of the most unthinkably dark films around. Take Charlotte Gainsbourg treating us to a clit-boner slicing session courtesy of some rusty old scissors; add in Willem Dafoe doing his best impression of the dog in Watership Down as he fucks up loads of the woodland critters and finish it up with a child being forced to wear his shoes on the wrong feet to cripple him – fuck you humanity. At least Von Trier gives us an opportunity to stop talking about Fassbender’s cock in Shame though, as Willem Dafoe is packing enough heat to make this look like an ode to Ron Jeremy.

“Life is great. Without it, you’d be dead.”  That’s probably the only refreshing philosophy in the whole film as it is mostly full of teachings on how deeply vile parts of humanity are, especially Midwest America. Only just narrowly beating out Harmony Korine’s other famous amoral anti-hero packed AIDs fest, Kids, comes Gummo and its twisted view of euthanasia, racism, Satanism and with a bit of pimping out of a down syndrome suffering sister thrown into the mix. Sick Chirpse took a particular disliking to this 90s cult film as there are repeated murders of cats – and saying repeated doesn’t even do it justice – I’m talking you could have a shot every time a cat is mutilated and you’d be totalled by about 30 minutes in. Vile.

Hopefully this one slipped under the radar for most of you as it is quite possibly the worst one on the list – infamously banned in Brazil, Spain and a few other countries because of its sheer depravity. Without drilling too many details into your poor little skull there’s a bit of child rape, murder, incest and a particular scene with a pregnant woman that will leave you wanting to tear your eyeballs out all Oedipus like. FEAR.net said, “I admire and detest it at the same time. And I will never watch it again. Ever.” We agree.

“WARNING: Some of this film may be seen as grossly offensive and should not be shown to minors!!!” A huge fucking understatement by the trailer for JÃ¶rg Buttgereit’s Japanese sick fest. I seen this on sale at CEX one Saturday and am slightly embarrassed to say that I immediately bought it on the thought of…I swear I’ve seen this film or should have seen it before. I hadn’t. I wish I could go back to a time before seeing it, it was a simpler time. A bloke brings home a corpse for him and his wife to fuck, the wife prefers the corpse, she bangs the corpse. Don’t watch this shit. If you do want to watch it still I suggest you just save yourself the money – get an old spade and take up munging. Oh and this is where you got the inspiration for that scene then is it Lars you old fruit? Lovely.  SPOILER ALERT with the video above. POSSIBLE SICKNESS ALERT with the video above.

Make no mistake, this film is not for the faint of anything…heart, head, balls, whatever – it will make you wish you were watching the final scene of Necromantik again – it’s that bad. This 70s cult classic was the last movie of Pier Paolo Pasolini, and he didn’t do the Kubrick trick of leaving his biggest dump for last but instead decided to go out with a bang, amongst other things. Still banned in many countries it centres around 9 teenagers who are subjected to every kind of abuse under the sun at the hands of four apparent facist weirdos. If you thought that the scalping in Inglorious Basterds was a bit tasty then try adding a bit more spice with rape, torture, sodomy and a penchant for bit of cutting out of eyes – a truly develish look at kind of shit Dante was describing – real seventh circle of hell shit.

So that was Sick Chirpse’s 10 Films That Will Make You Lose Faith In Life Itself .  If at any point during reading this article you had any desires or feelings listed below you can consider yourself everything that is wrong with humanity: