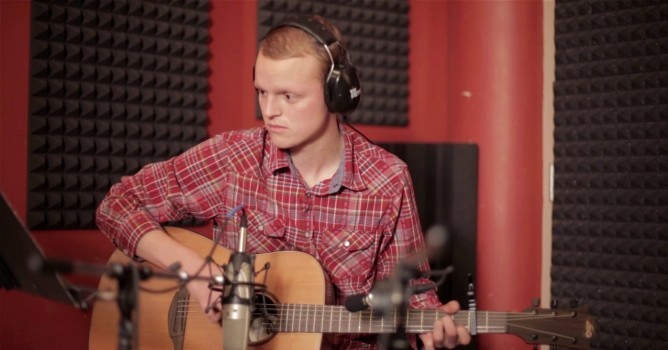 Zach Sobiech recently died at 18 because of osteosarcoma, but before his death he managed to become a musical sensation and release a debut album. This is his story.

So, I’m sitting here — drinking whisky and wine — in mourning of my youth, seeing as I turned 23 on Sunday, and whinging about the Contemporary Writing exam that I have tomorrow; mostly on account of my having not read the required books (Remainder by Tom McCarthy and The Stone Gods by Jeanette Winterson) having spent the entire year opting on anything but attendance and required reading. You’d think I’d’ve learned after my first attempt at university, but apparently not — next year though, I swear; model student.

Then I watched a video I noticed a friend posted the other day, whilst procrastinating for their last exam, about this kid called Zach Sobiech. Unfortunately, Zach died very recently at the tragically young age of 18 — six whole days before I started bitching about turning 23 — and yet, he’s managed to make quite a mark on the world, and an inspirational one at that.

â˜› Realize Your Dreams – Ever Wanted To See A Pig Surfing?

At 14 Zach was diagnosed with osteosarcoma, an aggressive form of bone cancer, and as anyone of any age would upon finding out they had cancer he went through the treatment and chemotherapy. As can be expected with many forms of cancer, and the unfortunate news for many sufferers, the treatment wasn’t likely going to be able to cure him.

Zach had had enough of being sick and stuck in hospital though — he wanted to enjoy what time he had with his family and friends. So he moved himself back home. Then, at the age of 18, cancer was found spread to his pelvis and both lungs; he was given only months to live. His mother suggested he try writing letters for everyone but being a budding musician, as part of a group with friends, these letters evolved into song lyrics and finally fully formed songs.

These songs were recorded, to be gifts and memories for his friends and family to cherish, but one particular song, called Clouds, was uploaded to YouTube and Zach’s story came to a much wider attention. The song quickly racked up the views, and soon enough Rainn Wilson (of the American Office) and his YouTube channel SoulPancake had actor/director Justin Baldoni out to make a documentary about Zach. The video went up at the beginning of this month, and you can watch it below. He’s even gone to No. 1 in the iTunes charts.

It’s a touching representation of any family going through such an experience, but it’s inspiring to see Zach take death and his unenviable situation in his stride. He comes across as incredibly mature for his age, and not just that, but in his last few months it looks like he lived more than many will in their life. Of course, not everyone can be as fortunate, if that’s even an appropriate word, as Zach in what he was able to achieve before he died but it just goes to show all that sentimental crap you hear can be true; you can do exactly what you want if you want to; you can make your dreams come true if you try; you can live even in the face of dying; you can do all that Hallmark moment sloganeering, and you know what, living ain’t so bad and people care more than you think you do.

â˜› Experience Happiness – We Went To A Cat Cafe In Japan

So, quit your bitching, at least until the next inconsequential thing gets in your way or your neuroses takes hold and throws you into a pit of anxiety, seize the day and stop being a maudlin cunt – do something with your life if you can. You could do a lot worse than achieve all that Zach wanted to;

“I wanna be remembered as a kid who went down fighting, and didn’t really lose.”