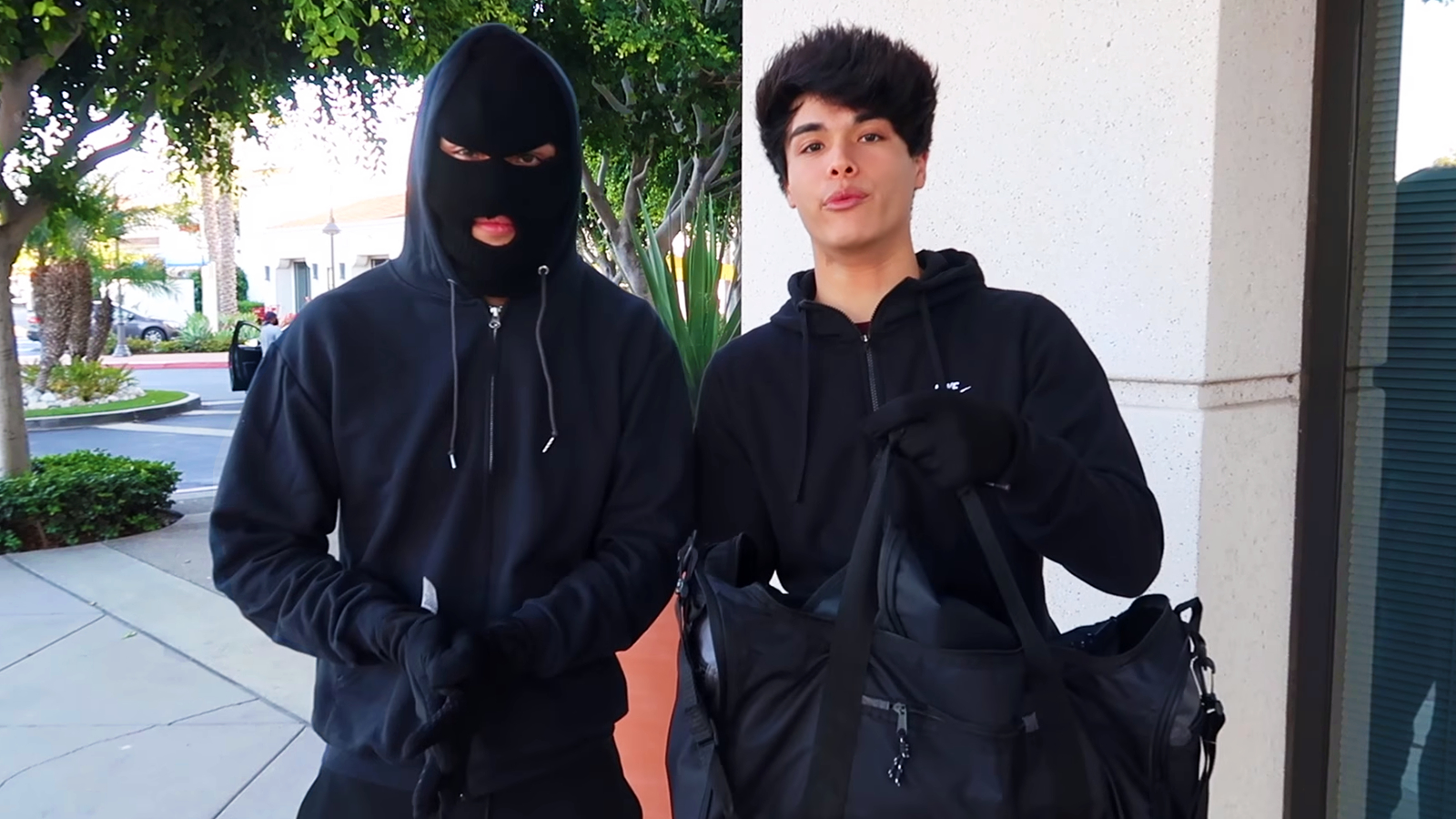 I’ll be honest, I’ve never heard of the YouTubers known as The Stokes Twins, but apparently they’re a pretty big deal though – at least until they started pretending to rob banks for their channel because now they’re facing up to four years in jail for their ‘pranks’.

The video has been taken down from their official channel, but you can still see it below. It basically involves the pair running out of  bank with ski masks on and a duffel bag and then trying to get an Uber and seeing that happens. It’s kinda funny I guess, but it just becomes a bit stupid when the cops show up and try to tell them off about what they’re doing and they’re just standing there filming it and laughing. Guess that’s what kids love to see these days though hey?

The video was shot last October, but the twins have now been arrested for their part in it and charged with one felony account of false imprisonment effected by violence, menace, fraud, or deceit and one misdemeanor count of falsely reporting an emergency. Here’s what a press release from the Orange County District Attorney’s Office said about the situation:

On October 15, 2019, at about 2:30 p.m., the Stokes brothers are accused of being dressed all in black, wearing ski masks, and carrying duffle bags full of cash as they pretended they had just robbed a bank while their videographer filmed this.

They ordered an Uber and when they got in the vehicle the Uber driver, who was unaware of the prank, refused to drive them. A bystander witnessed this, believing the two men had just robbed a bank and were attempting to carjack the Uber driver.

Irvine police arrived and ordered the Uber driver out at gunpoint. He was released after police determined he was not involved.

Police issued a warning to the Stokes brothers about the dangerous of their conduct and let them go.

They then proceeded to pull the exact same ‘prank’ four hours later on the campus of the University of California-Irvine.

These were not pranks.

These are crimes that could have resulted in someone getting seriously injured or even killed. Law enforcement officers are sworn to protect the public and when someone calls 911 to report an active bank robbery they are going to respond to protect lives.

Instead, what they found was some kind of twisted attempt to gain more popularity on the internet by unnecessarily putting members of the public and police officers in danger.

Lol I love the way they use the word twisted there – is what they’re doing really that messed up? I think the prank is kinda funny – then again though I don’t really find a lot of these YouTube pranksters that funny in the first place – but I think what I really can’t fathom about it all is that these two kids were willing to dress up in ski masks and didn’t think that the cops were gonna straight up shoot their asses or that they could end up in serious trouble.

I guess they’re white and this was back in October before George Floyd and everything that followed, but even so that is either some grade A balls or some grade A naivety. Thankfully they only ended up getting arrested, but it would be so good if they ended up going to jail because of this dumb prank. Love it when a YouTuber – or anyone for that matter – does something stupid and ends up paying the price for it. You have to really, don’t you/

For more of the same, check out this guy who took a woman bank robbing on their first date and tricked her into being the getaway driver. Fantastic.