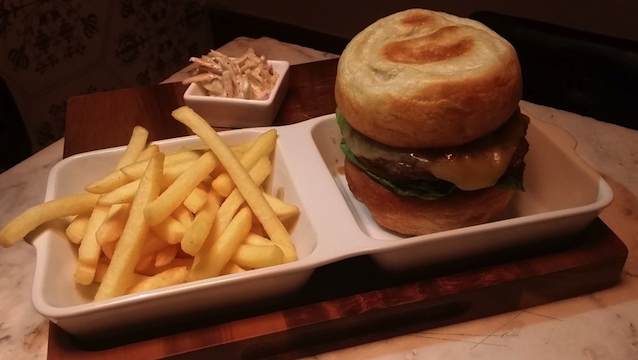 Some crazy Northern dude has now invented the Yorkshire pudding burger and it looks pretty much perfect.

As if the pizza burger and the Twinkie burger weren’t enough (let’s be honest though there can never be enough burgers can there?), some crazy Northern dude has now invented the Yorkshire pudding burger and it looks pretty much perfect.

The idea isn’t that it’s a Yorkshire pudding in a burger – that would be stupid, come on – but that the buns themselves are made out of Yorkshire puddings. Genius right? And so simple still – you can’t really believe it hasn’t been done before aside from in some grotty student house where the scroungers have run out of bread.

Sadly there aren’t any fancy trimmings like you get with so many hip burgers today and it’s literally just a cheese burger in between two Yorkshire puddings but that might actually work in its favour as sometimes simplicity is the key to success. Its currently only available at Rift & Co in Harrogate which will probably see its sales soar over the coming weeks until it starts cropping up everywhere because it’s so easy to copy.

The inventor is a guy called Jeremy Ambrose who had the following to say about it:

I set out with the goal of ‘encapsulating’ Yorkshire pride and this burger brings together the homemade feel of a Sunday roast as all as well as fitting the country’s tradition of batter superbly. All in all it’s another string in Yorkshire’s bow.

Clearly this guy rates himself quite highly for getting two Yorkshire puddings and putting them around a burger.