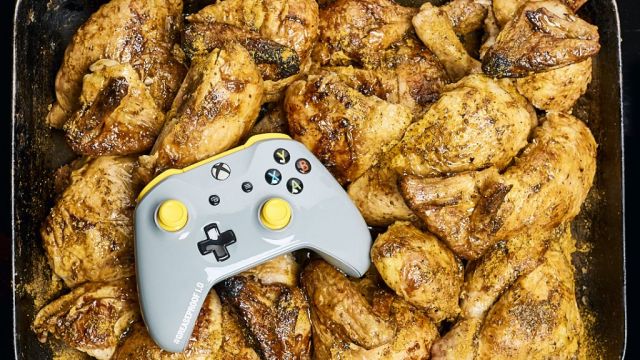 As far as first world problems go, one of the ones that really bugs me is when you’re having a FIFA session with your boys and your order takeaway but it makes it really hard to play because every time you pick up a slice of pizza or chicken wing or whatever, your hands get really mucky and you have to wipe them on your shorts or something. It’s really goddamn annoying and can result in you letting in a goal or getting killed on Fortnite or PUBG or whatever you’re gaming on.

Whilst it’s annoying, I never thought that anyone would actively go about finding a solution to this problem – I mean you can quite easily sort it out by just not being a gross human being – but X Box have decided to answer my prayers by releasing the Xbox PUBG Greaseproof Controller. Here’s a trailer for it as well as an official explanation:

The PUBG Greaseproof Controller is made with special coating resistant to grease and oil that is impervious to minor scratches, water, and of course, roast chicken grease.

Sounds like a dream. Unfortunately, the chances of you actually getting your hands on one of these seems fairly limited as only 200 of them are going to be made and given away in a competition over in New Zealand and Australia. You can enter that here, but do you really think they’re going to give one of these babies to someone in the UK? Get a clue.

For more controllers, check out this Xbox controller that drains your blood whilst you’re playing. Excellent?