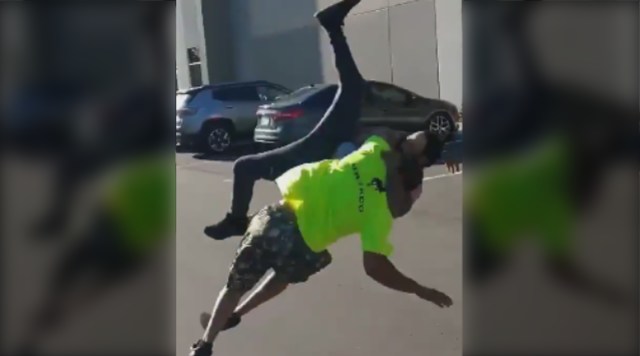 Do you smell what The Rock is cookin’?

What’s more emasculating than being hit with a WWE finishing move in a real life fight?

How about being hit with TWO WWE finishing moves in a real life fight, on camera,  and in front of your girlfriend after she’s just called you into work to defend her honour against a disrespectful co-worker…

Yup, that could not have gone any worse for the poor guy. Turns up trying to instigate a fight and ends up getting battered by the minimum-wage Dwayne Johnson. Gotta feel for his girlfriend too. Gonna be a very quiet day when she clocks in at work tomorrow. Probably gonna be quiet around their house for a while in general.

On the plus side he managed to get up quick enough to not then be on the receiving end of a People’s Elbow – now that would have been seriously embarrassing.

To watch a dude get hit with a Ric Flair chop in the middle of a real life restaurant fight, click HERE. As the Nature Boy would say – WOOOOO!