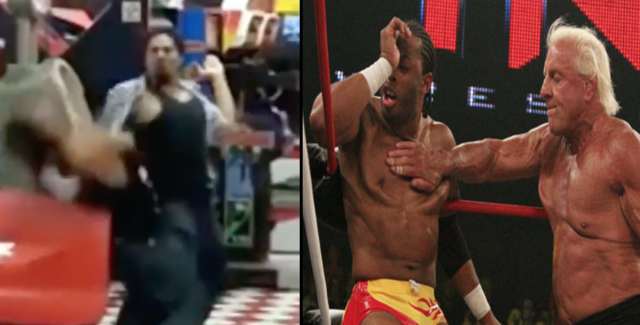 Ric Flair would be proud.

One of the most outrageous things you can do in a real fight is pull out a move from WWE, but you’d be surprised at how often it actually happens. Who could forget the time that kid pulled off the Jeff Hardy Swanton Bomb in the middle of a real world 1-on-1?

Anyway, it’s happened again, and this time we’ve got the assailant paying homage to one of the greatest wrestling superstars of all time – the Nature Boy Ric Flair.

Get a load of this Flair chop action:

Pure disrespect – especially the way he licks his hand before unleashing the chop. Probably been practicing that move in the mirror for the last 20 years and now it’s finally paid off. All that was missing was the custom Ric Flair “wooooo!” at the end.

P.S. Hope that guy is OK and didn’t end up snapping his spine as he folded backwards over the seating area. I don’t think any of Ric Flair’s opponents ever sold the chop better than that.

To watch the most devastating and humbling wrestling move of all time take place in Japan, click HERE.