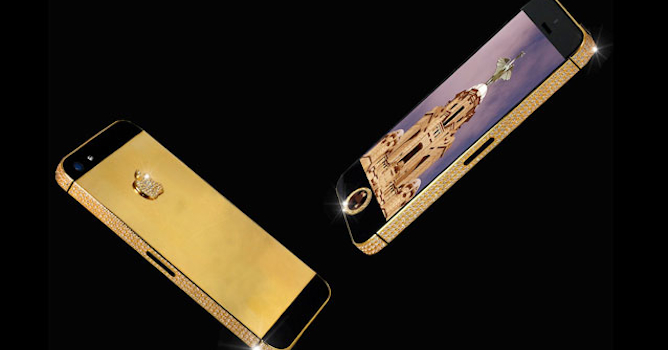 Think you’re pretty hot because you got an iPhone 5 the day it came out? That ain’t nothing compared to this $15m mobile.

This is just stupid, but also kind of cool. I mean how rich/dumb have you got to be to buy a phone that costs $15 million right? I mean what the hell is the insurance on that because let’s face it you’re probably gonna get drunk and lose it or fall over and smash the screen because that ALWAYS happens. Still, I guess if you’re a billionaire you might as well flaunt that shit, and you can probably put it on expenses because technically you need a mobile phone to do whatever business it is that has made you a billionaire.

So yeah, the phone was designed by some guy called Stuart Hughes who has a long history of making aftermarket electronics. It’s a standard iPhone 5 and it has a gold chassis that Hughes crafted by hand. The real expense comes from the home button though because it’s a 26 carat deep cut black diamond that is worth $14.5 million. I guess that’s gonna bump up the asking price a bit huh? There are also 600 white flawless diamonds located in the Apple logo on the back too, although none of them are as rare or as badass as the one in the home button. That’s the real dealbreaker right there.

You can’t actually buy this phone unfortunately. Don’t all sigh at once, I’m sure it’s what all you millionaires reading Sick Chirpse were planning on doing as soon as you finished this article, so sorry about that yeah. The phone was actually a private commission for Stuart Hughes from some sickhead Hong Kong businessman who is being referred to mysteriously only as ‘Joe.’ ‘Joe’ actually owns the diamond – as you do – and had done for a while and decided he wanted to do something cool with it, so got Hughes to design the phone.

I don’t know about you, but ‘Joe’ sounds like a complete badass to me.

How To Be A Complete Badass At Snake