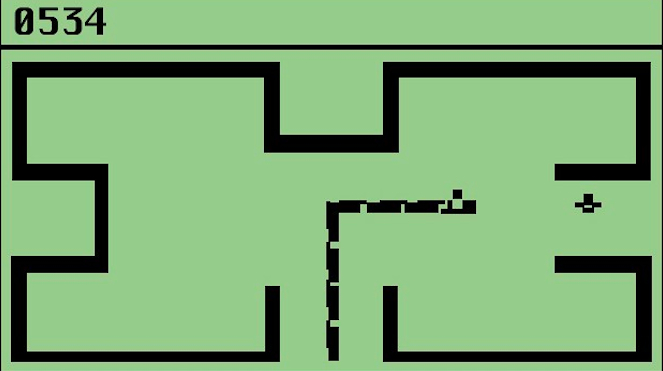 Remember playing Snake on your old crappy Nokia phone and never being able to get anywhere near completing it? Well check this out it’s a Snake walkthrough GIF and it’s completely epic.

I gotta thank my new Russian buddy Masha for sending this over to me. She said she was gonna write about it for us but she hasn’t and I genuinely thought it was one of the coolest gifs I’ve ever seen so I wanted to get it up as soon as possible. At least I’m giving her props I guess. Go follow her on Twitter because she’s cool @mashakuzmenko She tried to blag to me that it was her completing Snake in the GIF below though which wasn’t so cool though because I mean come on, like a girl could be that good at Snake.

Anyway, back in the day when before iPhones I’m sure that you probably had a Nokia at some point in your life and I’m sure that you probably sat on the bus or the train playing Snake when nobody else was around. Or maybe just in your lounge/bedroom when you were bored. You probably played it when you were hanging out with your friends too because they were boring. Face it,  it was a superfun game and there was that cool rumour that if you beat it then you got a free phone which nobody really believed but nobody could verify was untrue because NOBODY COULD EVER BEAT SNAKE.

â˜› A Different Kind Of Snake: Snake That Looks Like Giant Penis Discovered In Brazil

It was that hard and I guess that’s what kept you coming back and playing it over and over again. It was also really cool when you borrowed someone’s phone and beat their high score and they got really pissed off about it because they had to walk around knowing that someone else had the high score on their phone and being really embarrassed about it whenever anyone found out about it. Kinda like a tramp stamp or something.

But yeah, I’m pretty sure nobody ever finished Snake and nobody ever saw what it was actually like to win Snake and have the whole screen filled up with your Snake. It was just too hard. As soon as it got past a certain length it was just way too hard to manoeuvre the snake so you didn’t bang into its tail. You had to think like ten seconds ahead of it and in such a small space it was so easy to make a mistake. It was like literally impossible. Sure, there was always that one gobby kid who claimed to have beaten it but had conveniently lost his phone or had it stolen, but nobody ever believed him anyway because he was always making crap up. I hated that kid.

I gave up on Snake when I traded in my Nokia for whatever crappy phone I got instead before I finally managed to get a smartphone and to be honest I didn’t think about it much and I didn’t really lament the fact that I never got to see what it looked like when you completed Snake. But when Masha sent me this over I was completely and utterly transfixed by the end of it.

To begin with you’re just like ‘meh, Snake whatever I got this far a couple of times’ but when the snake gets really long and the guy playing it does all these crazy zig zag techniques and what have you I was literally on the edge of my seat. Sure, I knew he was gonna win but it didn’t make watching it any less exciting. It was completely sick and completely epic. And more importantly,  I guess now if I ever get an old Nokia I know how to complete Snake.

Yeah right, even watching this there is no way I could ever beat Snake, it’s just too damn hard. Watch this though and be amazed.