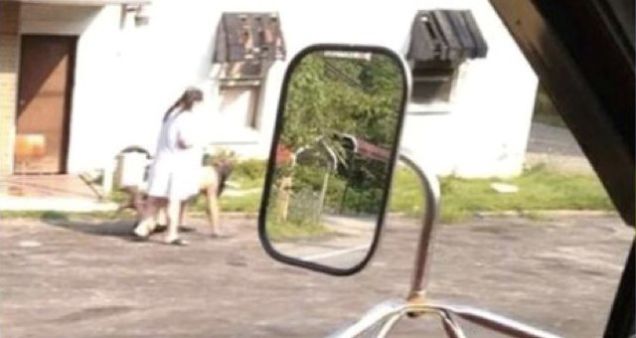 His hands and arms were tied and he was wearing a hood too. Just a normal day in West Virginia.

Another day, another completely weird hick/redneck event happens in America that doesn’t happen in Florida. What the hell is going on?

This time we’re in West Virginia in the bizarrely named Ohio County, where a woman was caught walking her naked, hooded sex slave down the road on Tuesday morning. As you do. The dude also had his feet and ankles tied up and had what’s being described as an ‘unknown object’ protruding out of his butt. Any guesses?

After a couple of complaints from passersby, the sheriff’s department picked the pair up and asked them what the hell was going on. They turned out to be an elderly couple – Barbara Jean ‘B.J.’ (lol) Geardello, 53, and Robert Deyell, 56 – who were indulging in what they described as a ‘harmless sex game’. Right, maybe for them sure but not for everyone else going about their business on a Tuesday morning. At least it wasn’t something more akin to Gaddafi’s rape chamber at least.

In fact, Geardello had a complaint for the sheriff’s office herself –  that she was upset that a couple of people had yelled at her and called her a freak. Can you really blame them though when you’re doing something completely weird like that at a really inappropriate time?

In any case, the sheriff let her go – without confirming the identity of the mystery object in Deyell’s butt unfortunately – but their report is with county prosecutors who will decide whether or not to charge Deyell with indecent exposure. We’re guessing they probably will.