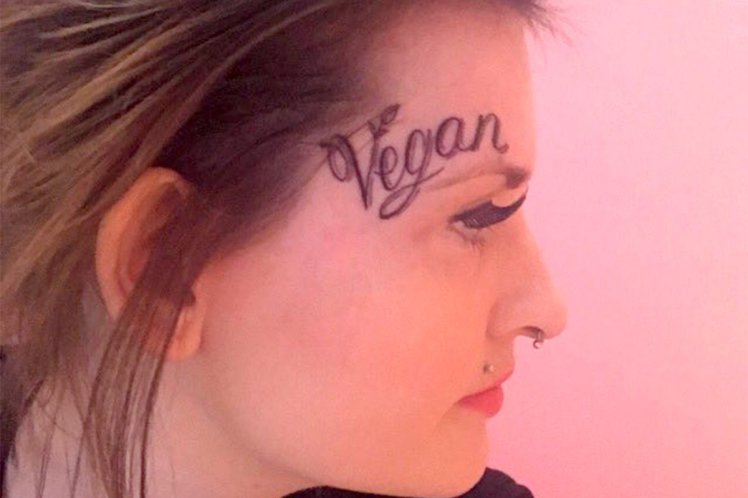 There’s an old joke out there about how you know if someone is vegan or not – they’ll tell you after five minutes – but I think this woman who just got a vegan face tattoo is the first person to take the next logical step with this attitude and tattoo the word ‘vegan’ on her head.

Needless to say, after Kate Bullen posted up the picture on her social media account she was ruthlessly trolled by a whole bunch of people who thought that it was a regrettable decision. You can catch a few of those responses below, but Kate doesn’t seem that bothered about it, saying she’s had a tonne of crap for being vegan most of her life so this is nothing different:

As if Kate Bullen has got a tattoo saying “vegan” on her face.. what the fuck, freak mate pic.twitter.com/caoHQjZzpR

I’ve received many negative comments on my tattoo which I expected as I’m used to facing criticism for being vegan on a daily basis, I don’t think people’s issue with it is because it’s on my face, people often get upset when they see the word “vegan” and I believe this is because they feel very defensive as it encourages them to think about the consequences of their actions i.e. their purchasing habits.

I’m really happy with my tattoo, I’m incredibly passionate about veganism and know I’ll be vegan for the rest of my life.

I mean fair play I guess. I think head tattoos are pretty dumb I’m not gonna lie, but if you wanna promote veganism and the fact that you’re vegan then there isn’t really a better method. Fair.

For more of the same, check out McDonald’s launching a vegan burger. Everyone is at it.