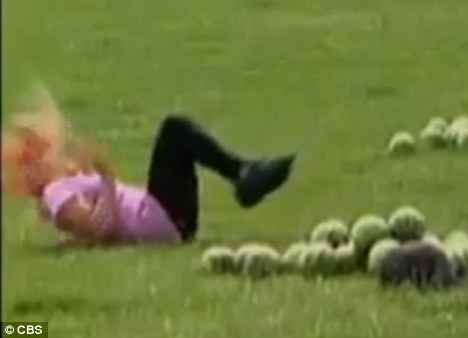 This week’s internet classic comes to you from 2010 and the TV show ‘The Amazing Race’, where a poor contestant got positively sauced by a high-speed watermelon catapulting into her face.

The woman was being encouraged by her very excited coach to hit an armoured knight with watermelons using some sort of medieval catapult device.

Here’s how that turned out for her:

No idea how he she didn’t need facial reconstructive surgery after that but it sounds like she has a concussion and can’t see properly. Amazingly, the coach tells her she has to carry on and finish, even though she’s the one who jinxed her in the first place by yelling ‘right in the kisser!’ right before she launched the watermelon.

The contestant, Claire Champlin, spoke to news.com.au years later about the incident:

At the time I was so little so to get enough tension in the slingshot I had to lay all the way down. When I went to release it I had too much tension and the leather strap wrapped around the watermelon and flung back into my face.

I didn’t know what had happened. I was laying on my back and it was like I’d been in a car accident, I was just in shock. I started pulling the watermelon off my face and I thought it was my own flesh.

I said to Brooke, ‘What do we do now?’ And that’s when her big line came: ‘You have to finish…they don’t call it The Amazing Race for nothing!

She ended up with a black eye and a busted lip, and even went on to continue the race after producers gave her some Panadol. Not sure I would have dealt with a watermelon exploding in my face quite so well. Fair play to Claire – what a badass.

For more internet classics, check out the infamous ‘How Can She Slap?’ video HERE. Unforgettable.