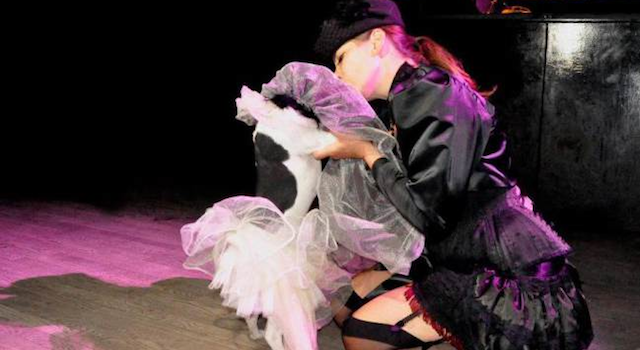 Apparently, Sheba was everything that 47 year old Amanda Rodgers looked for in a life partner.

A 47 year old British divorcee named Amanda Rodgers has decided to marry her pet dog – a terrier named Sheba – at a ceremony in Split, Croatia in front of 200 people. She had been married previously about 20 years ago but it only lasted for a few months, presumably because her husband realised that she was more in love with a dog than she was with him.

In a rather bizarre admission – especially considering they got married in August 2012 and it would seem that it had only just come to light – Amanda described everything that happened in the build up to the wedding and the wedding itself:

‘Sheba had been in my life for years, making me laugh and comforting me when I was feeling low. I couldn’t think of anything more I’d need from a life partner.’

‘I got down on one knee and proposed. I could tell by her tail wagging that she said yes.’

‘I’d dreamed of a perfect wedding dress since I was small, I made it myself for the ceremony. The day was wonderful, more fun than the marriage. I gave her a kiss to seal the deal and then everyone threw confetti. It was a wonderful moment.’

‘I know the wedding to Sheba wasn’t real in the legal sense. But it was a nice way to mark what Sheba means to me. Sheba’s never unkind to me and she’s always happy.’

OK, so there you have it – seems like it makes perfect sense right? Not really. Firstly, aside from the fact that marrying a dog is obviously completely weird, no matter how much you might live it, how the hell did she convince 200 people to go to Croatia to help her celebrate it?

How can kissing a dog and getting married to it be more fun than an actual marriage, unless perhaps you’re three years old? And surely the dog isn’t going to be a ‘life partner’ because it will die way before her? And finally, has she consummated the relationship with the dog or is this all just for show!? So many questions.

Amanda Rodgers is from Brixton and runs the club night Stranger Than Paradise at Hootenanny, so if you’re ever in the area maybe drop down with your dog and hang out.

â˜› More (Real) Dog Lovers: Woman Looks Through Boyfriend’s Phone; Finds Video Of Him Having Sex With Her Dog