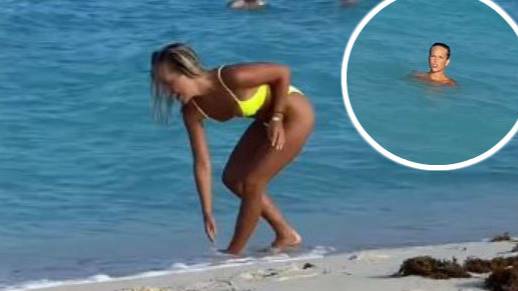 I think if you have a girlfriend or a boyfriend who can take a prank, it’s only fair to get them every now and again but I think even I would draw the line at the one featured in this video. Guy has got some balls to attempt this one!

Julius Dein – which I’m having trouble even believing is a real name – was on holiday with his girlfriend Estelle when he decided to switch out her bikini for one that dissolved as soon as it touched the water. He then proceeded to film her reaction and probably racked up millions of views and made a bunch of money off it too.

Yeah that is kinda funny but not as good as I thought it would be. She doesn’t even really get that angry or upset about it and he just hands her the towel and she gets out! That’s not we wanna see – expected her to be screaming at Julius all over the shop. I guess she’s used to it, but even so I was hoping for more.

Some people are saying that the prank was faked as well, claiming that you can see a yellow bikini under the towel at the end and that Julius tried to crop it out to make it look like she was naked. That could be true.

For more of the same, check out these mysterious naked cyclists that were terrorising Germany a few years ago. Kinda scary.