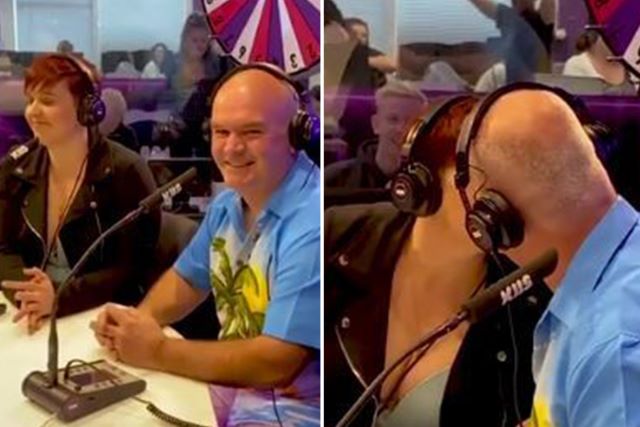 The Kyle and Jackie O show over in Australia were playing a game called ‘Boyfriend or Daddy’, in which the hosts have to figure out whether the guests they have in the studio are a couple or father/daughter.

In a clip that could very well ruin your day completely, 26-year-old Stacy passionately kissed her 49-year-old dad Nick in order to successfully dupe the hosts into believing they were boyfriend and girlfriend, and bagged £550 in the process. Um, worth it?

Prior to that full-on snog, the dad and daughter had ‘pecked’ on the lips as they entered the studio and the show’s newsreader Brooklyn Ross noted they had been holding hands in the green room, so looks like they really put the effort in. Wonder if they went full-on method acting mode and were pretending to be a couple the entire week prior to properly get themselves in the zone? Yikes.

They didn’t seem phased by any of the ‘uncomfortable’ questions either, with Stacey answering one about her favourite position:

I always go on top. I’m a little bit smaller than him so I kind of don’t like to be smothered, so being on top is definitely the way to go with us.

Nick himself said he liked it ‘underneath’, and when asked about his opinions on oral sex, he said:

Yeah… it took a while to get me to come around that way, both giving and receiving.

I’ve taught him a lot.

Blimey! Full marks for putting the effort in and managing to convince everyone, especially as they look enough alike, but it’s still pretty shocking that anyone would snog their dad/daughter in front of the world for a measly £550. Makes you wonder if there’s anything we should be worried about here. I mean the dad did seem to be enjoying himself a little bit too much if you ask me.

Earlier this week, MotoGP star Miguel Oliveira spoke on the secret 11-year relationship he’s been having with this step-sister. Not as weird as snogging your dad, but still a bit weird.