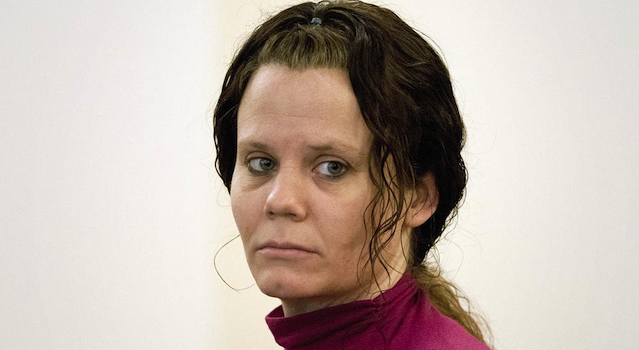 Another day, another completely messed up example of human behaviour.

Here’s another completely messed up story, following on from the post earlier today about the restaurant in Nigeria that was serving roasted human heads on its menu.

This time we’re in Worcester, Massachusetts where 39 year old Julie Corey was convicted yesterday of killing her eight month pregnant friend 23 year old Darlene Haynes in 2009 and then cutting her baby out of her stomach and taking it home and passing it off as her own. Corey herself had been pregnant previously but had suffered a miscarriage three months prior. Following the murder, Corey took the baby home and told her boyfriend and family that it was her own. Messed up, right?

Haynes was found dead on July 27th, 2009 in a closet in her apartment having been beaten on the head and then strangled with an electrical cord. Her abdomen had been cut open and the baby had been taken. Corey and her boyfriend Alex Dion were found at a homeless shelter a couple of days later with the baby.

Corey’s defence lawyers did not argue that she hadn’t taken the baby but focused instead on the murder, contending that police hadn’t followed up on leads that could have implicated other suspects in the crime, in particular Haynes’ ex boyfriend (whose identity has not been revealed). They also stated that Haynes’ ex boyfriend may have given the baby to Corey and Dion to look after following the murder.

Surprisingly though, Alex Dion denied this when on the stand. Guess they either broke up or he must really love telling the truth. In fact, it was pretty much his testimony that condemned Corey so one of those two statements – or maybe both – must be true.

Dion said that Corey – who he still believed to be pregnant at this time – called him on July 23rd 2009 and said that she was giving Haynes a lift to the store. Later she called him again saying that her water had broken and a friend was taking her to the hospital to give birth. For some reason Dion didn’t go with her (?!?!) and Corey returned the day after with the child, who she told Dion was his and proceeded to introduce to her family in the following days.

The whole story seems pretty fishy – why didn’t Dion go to the birth? Why were they in a homeless shelter? Why didn’t Dion at least try and not implicate his girlfriend in Haynes’ death? Something doesn’t quite add up, but the jury have found Corey guilty so that’s that for now. She’s going to be sentenced next Tuesday.

The baby is now four years old and lives with her biological father.

â˜› More Messed Up Behaviour: This Woman Was Involved In The Bizarre Sexual Torture And Humiliation Of A Man Twice Her Age But Got Off Scott Free