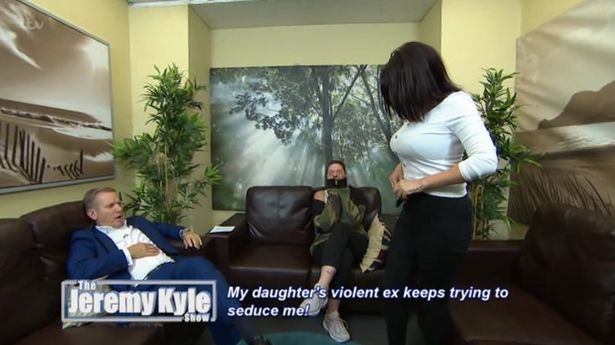 Even by The Jeremy Kyle Show’s standards this is pretty up there in absolutely ridiculous behaviour.

Jeremy was welcoming Kaz onto the show today who claimed that her pregnant daughter’s boyfriend was trying to seduce her and always asking her to send him nudes. His response was that she walked around the house constantly in a G string so it was kinda difficult not to look at her. Fair enough really.

Anyway, because of all this talk of a G string we then discovered that Kaz had a Jeremy Kyle tattoo on her inner thigh and she was soon pulling her pants down to show everyone in the audience and everyone at home. She then tried to seduce Jeremy Kyle.

God you have gotta love The Jeremy Kyle Show haven’t you? Always makes you feel better about your life doesn’t it?

Not really sure who the biggest loser out of all those three is as it’s a very close run competition, but I might have to go with Kaz to be honest just because her Jeremy Kyle tattoo is so crap. I mean you know it’s gonna be bad when you have to spell out who it is on the actual tattoo as well hey?

For more of the same, check out the most unexpected result of a lie detector test of all time. Seriously.