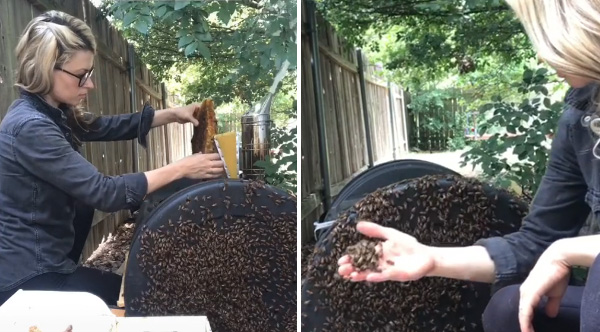 A beekeeper named Erika Thompson from Austin, Texas, has gone viral this week for the unbelievably calm manner in which she removed a colony of bees wearing no protection whatsoever and not getting stung even one single time.

Unreal. How is it that Erika can deal with thousands of bees like this without getting stung and the rest of us get 3 stings to the hand just eating an ice cream in the park? If I’m within 20 feet of a bee I start freaking out to the point that I look clinically insane. Does Erika just have the magic touch or do bees just sense that the rest of us are arseholes who deserve to be stung?

I don’t know but I’m picking up serious Catwoman/Poison Ivy vibes from her so maybe it’s for the best she never gets stung. Very impressive stuff though either way.

For the woman who went to hospital with an eye infection and found she had 4 bees living in her eye balls (!), click HERE.