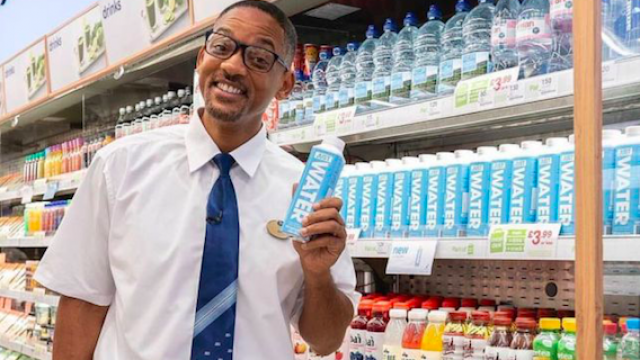 This is a story all about how my life got flipped turned upside down….

If there was one person you probably didn’t expect to see as you walked into Boots this Tuesday on your lunch break then Hollywood legend Will Smith was probably pretty high up there on your list, but nevertheless there he was in the Westfield Centre helping out employees for the day.

Will was there to help his son Jaden’s new water business called JUST Water. It’s a bottled water that’s made up of 82% recyclable material so in fairness is a pretty good idea – I’m just not sure if getting your famous dad to dress up in a Boots uniform to promote it is the kind of launch that a product like this really needs. I suppose it’s a weird story if nothing else though right?

Will had this to say about Jaden and JUST Water:

Or newest colleague. Thank you to Will Smith for helping launch the new environmentally friendly water brand Just Water pic.twitter.com/mcWtAsHY7O

While Jaden was surfing as a young kid, some plastic water bottles floated by him and he soon realised that they were dirtying our oceans and killing the environment.

He was immediately motivated to do something to save our planet; our future – and with that wish, JUST Water was born.

Right on brother. That is a cute story and considering Jaden seems a bit more woke than most people his age or even me I kinda believe it too. I hope it takes off too because if there’s anything we are becoming increasingly aware of it’s that there’s way too much plastic waste in the world right now. Preach.

For more Will Smith, check out this philosophical rant he went on about morphing into a picture of Uncle Phil. Weird.