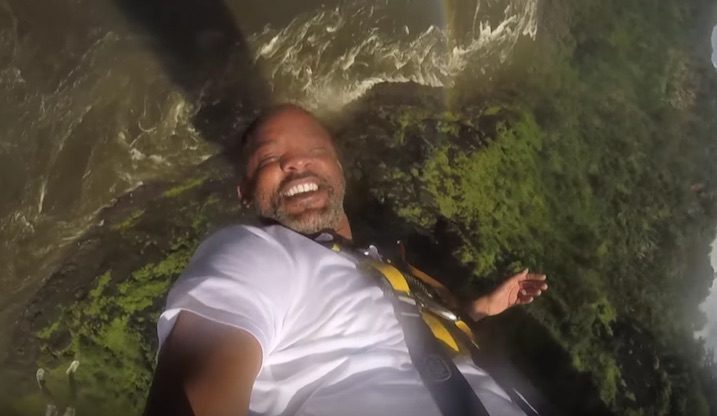 He’s been spending too much time with Jaden.

A photo of Will Smith bungee jumping went viral a few weeks ago because it seemed to look like him morphing into Uncle Phil.

Whilst everyone had an opinion on it, Smith himself stayed quiet. Until this weekend that is when he was attending the San Diego Comic Con to promote his new movie ‘Bright’.

Unusually though, when asked about the photograph Smith completely ignored it and chose to instead go on a philosophical rant about the nature of celebrity:

It is such a new world. I released my first record in ’86, so I’m over 30 years in the business. My first album there were no CDs, so it wasn’t until my second album, and they came like these hot new things called CDs. Seeing that transition, essentially the fans being more and more involved in the creative process. In terms of movie stars, it’s a huge difference. It’s like you almost can’t make new movies stars anymore. It’s like there’s a certain amount of privacy and there was a certain amount of distance that you had from the audience, and only on July 4th did you have access. So that amount of access created this bigger-than-life kind of thing. But in the shift into this new world, it’s almost like a friendship with the fans. The relationship is less like the time of Madonna, Michael Jackson, when you could make the Tom Cruise these gigantic figures, because you can’t create that anymore. The shift is to ‘we’re best friends,’ and that’s like with the comments and with those pictures and all that. I love trying to make that shift and make that transition into the new demands of the fans in this business.

I mean great, but it’s not really answering the question about why he’s morphing into Uncle Phil is it? Give us what we really want to know, goddammit Will Smith.

For more Will Smith, check out the trailer for his new movie ‘Bright’. Looks completely sick.