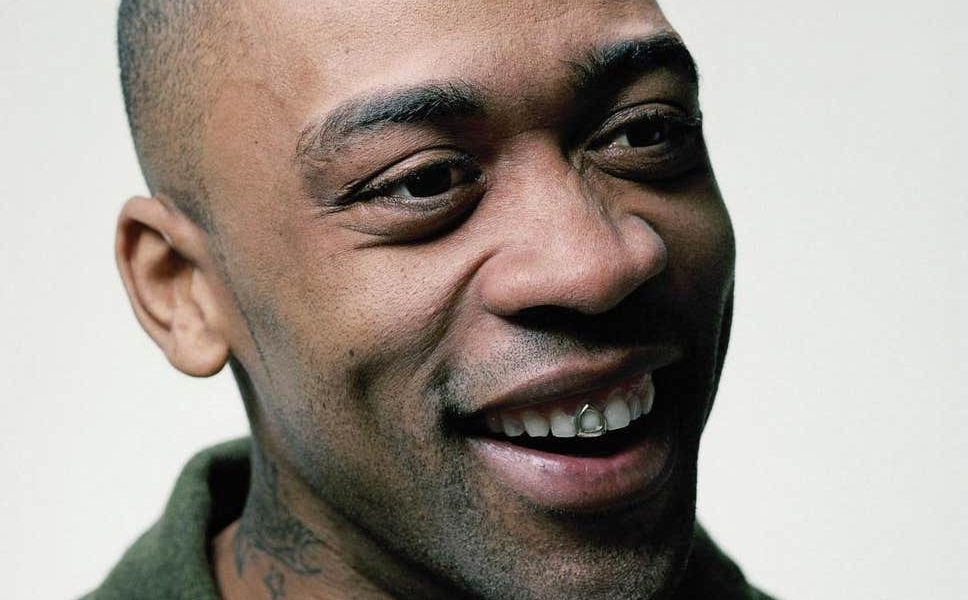 The ‘Godfather of Grime’ Wiley has put his foot in it once again this week by launching a long anti-semitic rant on Twitter in which he called Jews “too touchy” and said that “Israel is not yours” .

Here’s some of the stuff he’s been Tweeting: 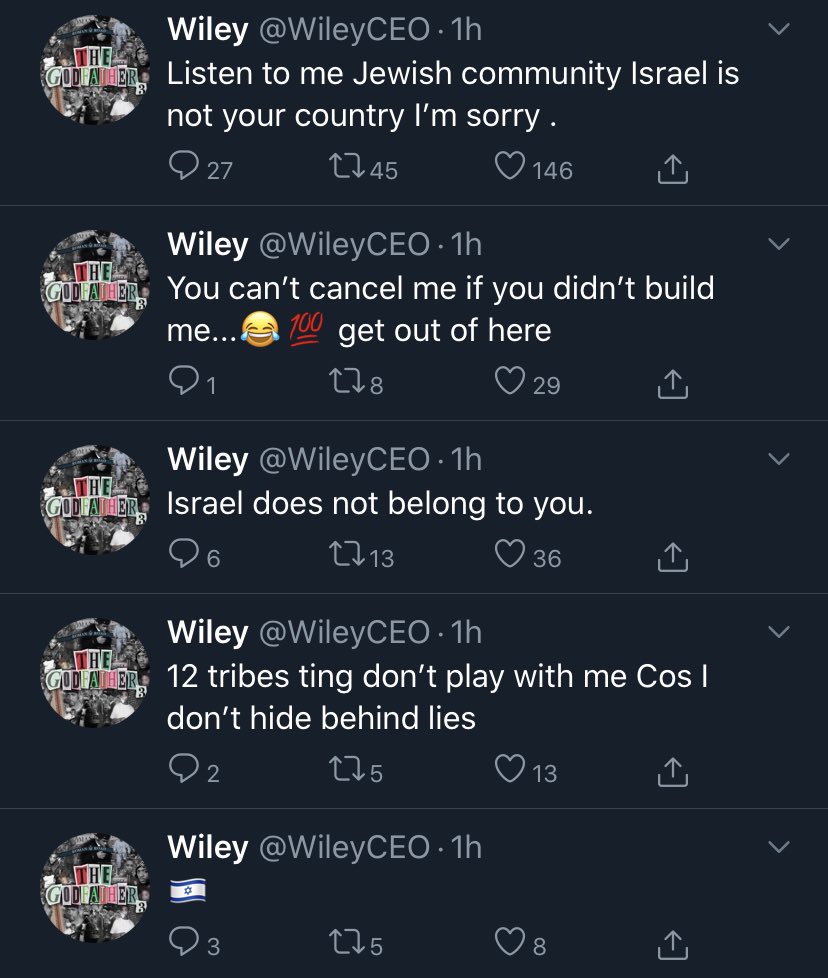 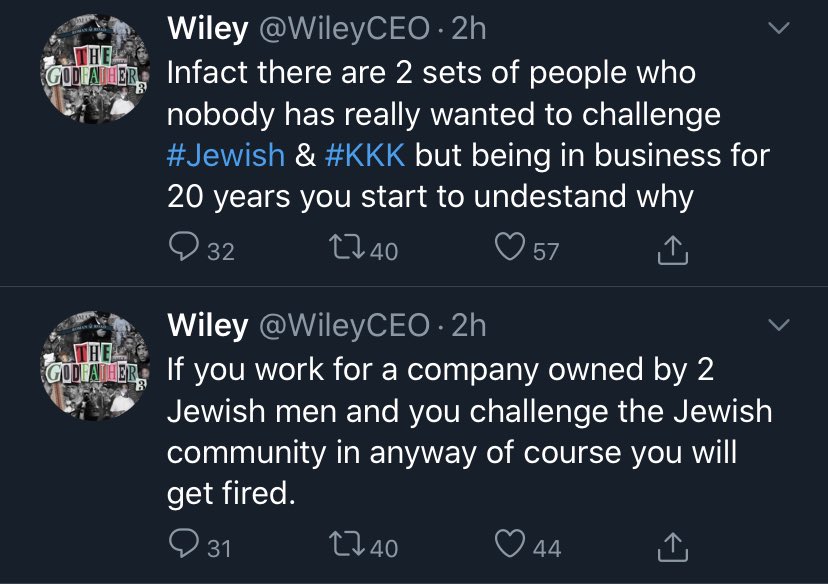 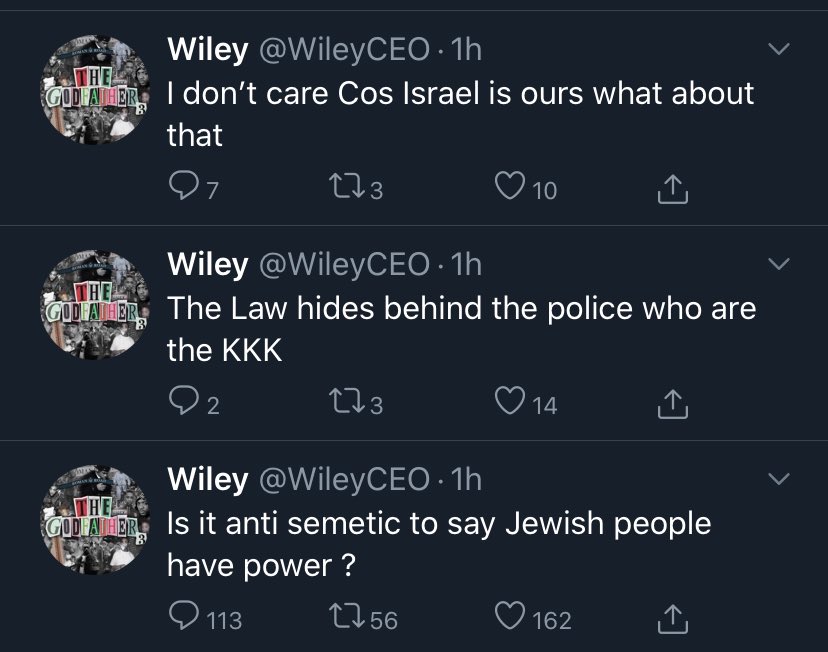 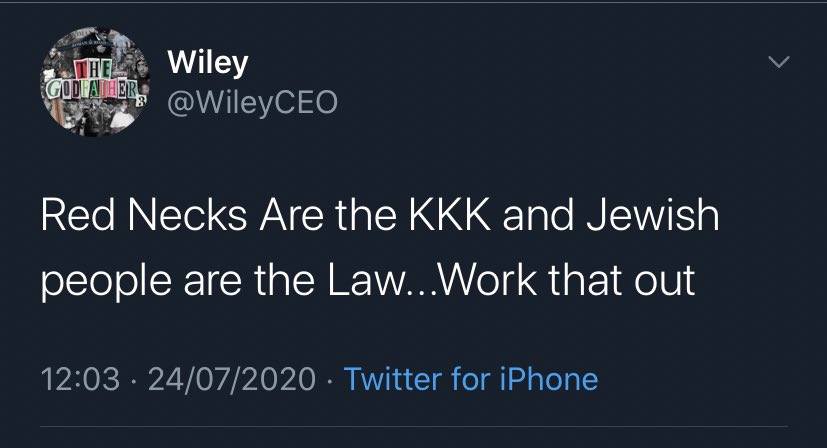 The response has basically been people unanimously telling Wiley that he’s a racist and a twat:

Hi @WileyCEO. You know who else shared your views of Jewish power? Clue: First name began with an A, second an H.
You are a racist. Unambiguously. Don’t try to pretend you are speaking some sort of truth. You are spouting Jew hate, like neo-Nazis and the rest of them https://t.co/eyu9gP03pQ

Didn’t realise today would be the day Wiley outed himself as a rabid antisemite but here we are pic.twitter.com/KM4AVxRj68

Wiley is a fucking clown, he’ll try anything to be relevant even antisemitism

Here is Wiley, who earlier tweeted the Jewish community was too ‘touchy’, positing that being in business gives one insight into why people don’t ‘challenge’ Jews and the KKK. The parallel is offensive & the inference is antisemitic. Jews and money. Dress it up however you like. https://t.co/sKtQYHqaKm

you are contributing to racism with these tweets Wiley, something you claim to be against. Honestly, I’m fucking disgusted with the shit you’ve come out with today, I never had you pegged as part of the problem.

Wiley seems to be having a bit of a racist meltdown.

Also tweeting about “the KKK and Jews” being in power. He does know what the KKK did to Jewish people, right? pic.twitter.com/imDl67DfWs

Wiley is still doubling down on his comments over on Twitter and boasting about the fact that he’s Trending even as this is published, so I guess he’s got what he wanted out of this:

Just Wiley doing what Wiley does? Well, somehow I think this is a little more serious than all the other nonsense he’s Tweeted over the years, so I’m not sure he should be celebrating the fact that he’s Trending. I mean we all saw what happened to Nick Cannon last week when he made similar comments about Jews. It really boggles the mind that someone can be so anti-racism when it comes to discrimination against their own group identity and then jump onto social media and be so rabidly antisemitic. He’s even using the classic “it’s not racist, it’s the truth” argument to defend himself.

Then again, we’re talking about a guy who Tweeted this earlier too:

For the story on how Wiley and Dizzee Rascal fell out 20 years ago, click HERE.