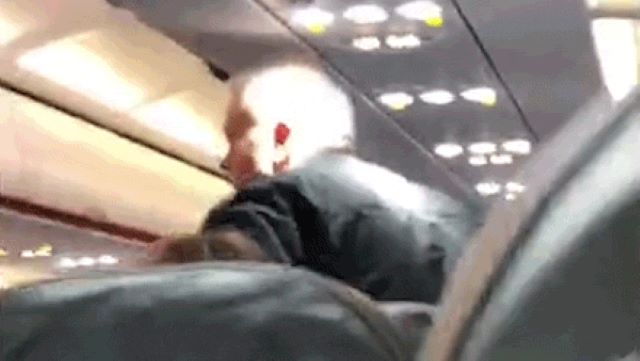 Another day, another coronavirus-related meltdown on a commercial flight, this time a involving an older gentleman who refuses to wear a mask and ends up humiliating his wife so badly that she slaps him across the face.

Footage via the Metro shows a packed Easyjet flight from Manchester to Tenerife preparing to land when the man suddenly starts ranting and telling people “you’re being lied to” and “the longer you wear them masks, the longer this shit goes on”.

His wife tries to calm him down but he makes the ultimate error in responding as follows:

Shut up you fucking imbecile.

Which invites a well-deserved slap from his long-suffering better half:

Welp, that’s that holiday ruined before it’s even begun. As soon as she slapped him the whole thing escalated to another gear where other passengers got physically involved as they saw him prepare to retaliate.

The man then hilariously tries to fight other passengers:

I’ll fight you lad! I’ll smash your fucking face in.

Oh dear. The airline later confirmed that police attended the flight due to a passenger ‘behaving disruptively onboard and refusing to wear their face mask’.

What I don’t understand is that this incident took place as the plane was preparing to land, which means this old geezer must have been wearing his mask at the airport, as he boarded the plane, and during the flight itself up until that point as is law. How funny that he waited until the final moments of the flight to go into anti-masker mode and have a whole meltdown over it. Hopefully he’s calmed down now and made up with his wife and they’re chilling on a socially distance beach in Tenerife as we speak.

Last week, another anti-masker deliberately coughed all over passengers as she was escorted off her flight. This pandemic sure is making people crazy.