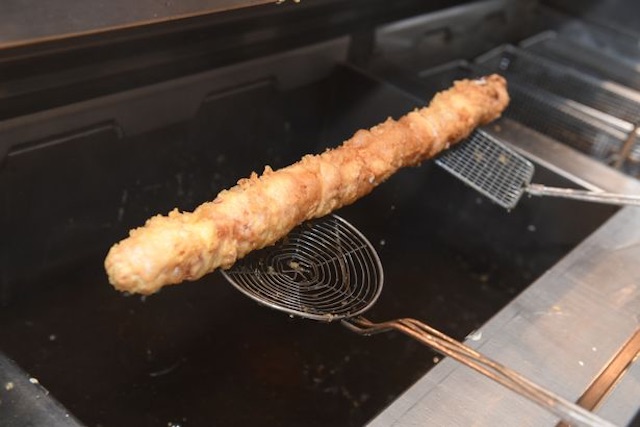 I thought I had seen it all when I had come to innovations in the field of pigs in blankets this year, but then Papa’s Fish And Chip Shop on Cleethorpes Pier came along and blew me out of the water.

Their version of a pig in blanket isn’t even a pig in blanket because it’s so massive and different – they’re calling them ‘Hogs In Duvets’. They’re basically your regular pigs in blankets but they’re two foot long and they’re battered, so I guess a two foot long battered sausage with some bacon in between the batter and the sausage as well.

Take a look at them in action below and hear what George Papas has to say about them underneath that:

We’ve always sold battered pigs in blankets during the festive period for the past five years.

Last year we sold a foot long but this year we have moved it up another level and are selling the world’s largest battered pigs in blanket that we are calling a hog in a duvet.

It’s the most amazing pigs in blanket you could ever have. It would be a challenge for one to eat but we would love to see if anyone can, and if not, it’s something to order on top of your fish and chips to share.

We love Christmas and getting in the spirit so this is a great way to do it, as well as raising money for charity as well.

All the money we make from the hogs in duvets is going to Cash For Kids so that all children in our area can have a better Christmas.

We are a family business and believe in helping out as many children and family charities locally as possible. It is our way of saying thank you and giving back to the community.

Yeah, that really is something isn’t it? Good thing that he cut it in half because I don’t think it’s the kind of meal that you want to be eating all of all at once. Unfortunately with the current Tier three restrictions in places it seems doubtful that I’ll be visiting Cleethorpes Pier this year.

For more of the same, check out these pigs in blankets pizzas that are available from Lidl. What a year we’re going to have at home stuck in Tier 3.