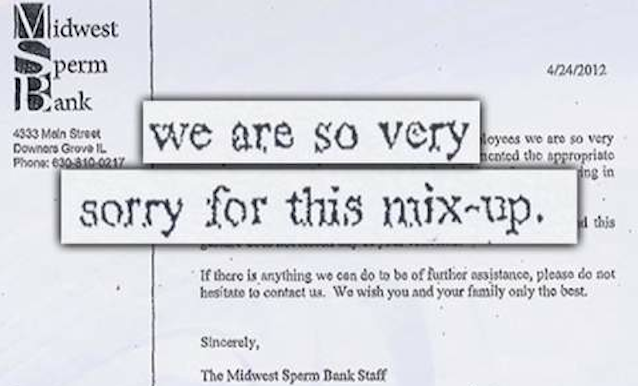 A lesbian couple have sued the Midwest Sperm Bank over in Chicago when it turned out that the sperm that they had been given belonged to a black man rather than the white donor that they had chosen. That’s a bit of a major fuck up, surely? Do you think it was anything to do with the man who recently died at a sperm bank from wanking too much?

The mix up happened due to a clerical error as donor 380 got mixed up with donor 330. The sperm bank is blaming the error on the fact that all their records are hand-written and not electronic, which means that they can obviously be misinterpreted more easily and that’s what happened. You can bet whoever made that error lost their job pretty sharp though.

The error was discovered when Jennifer Cramblett, 36, was five months pregnant in 2012 and she asked the sperm bank to reserve more sperm from her donor for her partner Amanda Zinkon, 29, in the hope that she one day would get pregnant with it too. Unfortunately that probably isn’t going to be the case considering how badly the sperm bank fucked up.

Reassuringly, the couple do say that they love their 2 year old mixed race daughter with all their hearts, but are slightly worried about raising her in a predominantly white neighbourhood. Middles class problems huh? They say that they’ve decided to sue the sperm bank and look for a minimum payout of $50,000 because they want to make sure that this kind of mistake never happens again.

I guess that’s pretty honourable because other parents might not be as understanding about a mistake like that because it is a massive screw up even if the race factor wasn’t part of it. Just looks at these parents and the way they reacted when their son came out to them – there are some real pieces of shit out there.