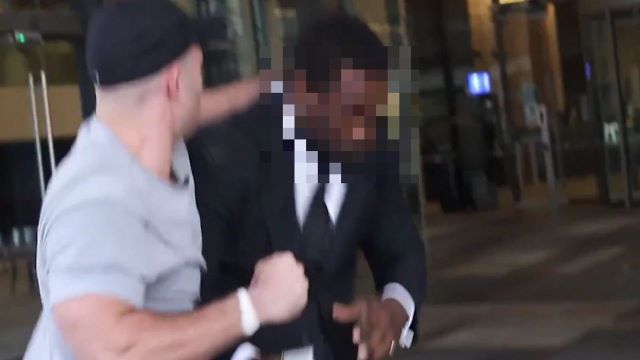 Australian Nazis are the worst.

The leader of an Australian neo-Nazi group has been filmed beating up a Channel Nine security guard just hours before the network’s A Current Affair broadcast a segment about the organisation.

Thomas Sewell is the leader of the National Socialist Network, and is so racist that he doesn’t even pretend that he isn’t racist. The guy is literally an Australian Nazi and so is his asshole cameraman. Tommy Robinson, eat your heart out:

Is there a stupider place and time to film an assault on a security guard than in the foyer of a media company’s office hours before they air a segment about you? Probably not. But when you’re stupid enough to be a Nazi then anything’s possible.

The security guard was taken to hospital by ambulance and is hopefully doing OK after looking quite wobbly at the end there. Let’s hope Thomas Sewell gets what he deserves and isn’t just given a fine and some anger management classes or however they might do things over in Australia. Absolute scumbag of the highest order.

To watch an MMA fighter covered in Nazi tattoos get battered in under 3 minutes, click HERE. Why make it worse for yourself?