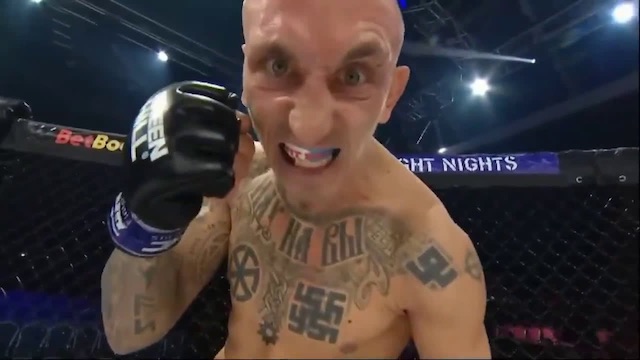 I think if there’s one thing that almost everyone in the world can agree on, it’s that there’s absolutely nothing good about Nazi symbols and those that associate themselves with them (obviously excluding actual Nazis from that group), so all of us can probably agree that seeing this MMA fighter covered in Nazi tattoos getting his ass absolutely handed to him is an excellent video.

Mikhail Turkanov is known as The Pitbull of St Petersburg and recently competed at a Fight Nights Global (FNG) event over in Sochi against Alibeg Rasulov. The guy would probably look a bit intimidating to your regular guy in the street thanks to his tattoos and being a professional MMA fighter, but Rasulov was having absolutely none of it and beat the absolute shit out of him, causing the referees to stop the fight after a bunch of unanswered punches to the head from a dominant crucifix position.

It really is beautiful to see:

You can’t really help but laugh at the Nazi getting the shit kicked out of him there, although some people have criticised the stoppage for being too early given how easily Turkanov returns to his feet following the fight being called. Who the hell cares about that though? Just great to see a Nazi get savaged. I suppose you could argue that it might have been better if the referee had let it gone on longer so he got beat up even more, but the people straight up fretting about the rules on this really need to do one.

For more of the same, check out when Sky History used a guy with a Nazi face tattoo to advertise a woodworking show. Bit different.