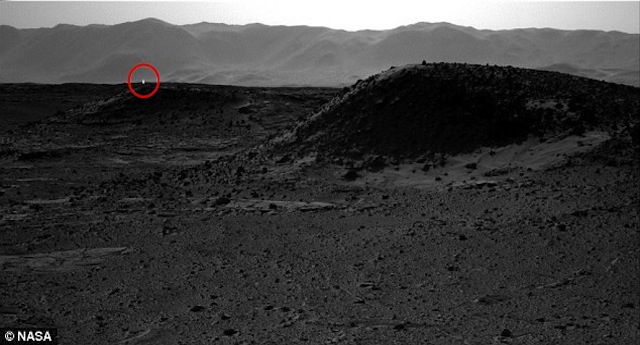 A NASA camera on Mars has captured what looks like artificial light emanating from the planetâ€™s surface. Could it be coming from an underground alien bunker? Or is there a more rational explanation…

A NASA camera on Mars has captured what looks like artificial light emanating from the planet’s surface. NASA hasn’t released any official statement yet but conspiracy theorists and space fans are getting properly excited about it.

“This could indicate that there is intelligent life below the ground and uses light as we do”, wrote Scott C. Waring at UFO Sightings Daily. “This is not a glare from the sun, nor is it an artifact of the photo process.”

Oppositely, Phil Plait of Bad Astronomy suggested that Waring was talking bollocks and said a more reasonable explanation was that “a subatomic particle smacked into the camera, leaving behind its trail of energy.”

Obviously the latter quote makes the most sense, but whether any photos ever turn up that actually prove that there is intelligent life outside our planet or not, I’ll always believe that you’d have to be naÃ¯ve to think there isn’t. It would be the least surprising thing ever if we were contacted by aliens, but also mind-blowingly surprising at the same.

UPDATE: Nasa has released a statement saying the light is most likely “cosmic-ray hits or sunlight glinting from rock surfaces.”

â˜› More Aliens: Stories By People Who Claim To Have Been Abducted By Aliens

Bonus: Here’s Bill Clinton on Jimmy Kimmel the other night talking about aliens: