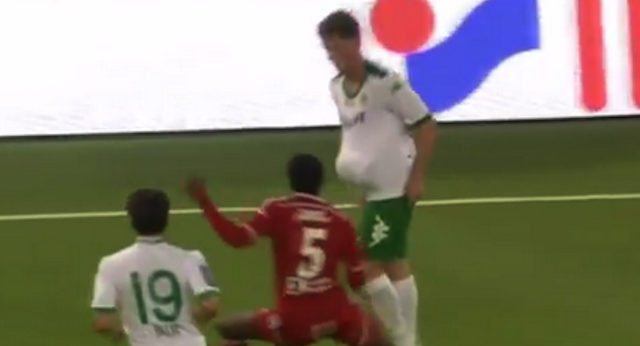 In the Swedish second division on Monday, a player was booked for catching the ball in his shirt as it bounced on the ground. What?

In the Swedish second division on Monday night Hammarby (who I thought were kind of a big Swedish team?) managed to hammer (get it?) Degerfors 5-0.

The five goals had been scored well before the end of the match, so Hammarby decided to do some showboating against their lacklustre opponents, which included Norwegian player Jan Gunnar Solli grabbing a bouncing ball in his shirt by pulling his shirt away from his stomach and letting the ball bounce into it. It was the kind of trick you might see one of those guys who are really good at keepy uppys pull off.

Even though the ball didn’t appear to touch Solli’s hands at any point, referee Lars Olsson decided to book him for his little party piece. We’re told it’s because he classified it as an obstruction but that seems rather far fetched to me. Can honestly say that I’ve never seen anything like this before in a professional football match though, so I’ve got to give the guy mad props for pulling it off. Nothing like kicking your opponents in the face when they’re down.

â˜› More Cards: The Top 5 Most Ridiculous Red Cards In Football Ever