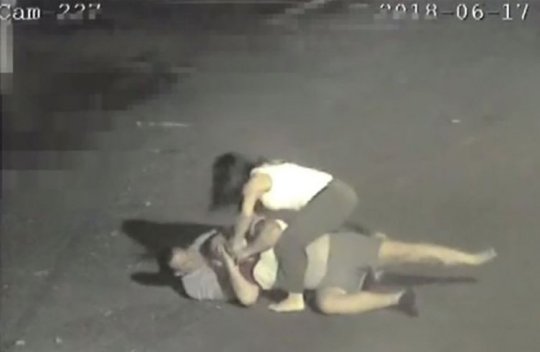 Everyone knows that drinking a load of pints can often improve the possibility of violence, but you don’t normally tend to see it coming from women who identify themselves as grandmothers.

Sure, Tammy Goodfellow might only be 41 – good effort for making it to grandma status at that age – but she knows how to knock them back, as she downed 10 pints and then launched an attack on Charlie Rudkin in Longhill, Hull. Goodfellow’s husband tackled Rudkin – who has mental health issues – to the floor and kept him in a headlock whilst Tammy rained punches down on his defenceless body, before he eventually passed out from being strangled.

You can see video of the despicable incident below:

Absolutely revolting. Tammy yesterday was jailed for one year at Hull Crown Court and her husband was given a six month suspended sentence. Her son George was also given a rehabilitation order – apparently he threw punches at Charlie too, before stumbling over and knocking himself on a bollard because he was drunk. Sounds like one hell of a family night out.

Despite their sentences, Charlie doesn’t feel like the punishment was anywhere near enough considering his injuries left him near death:

Hopefully the footage will put all the rumours to bed that I started anything physical – I don’t deserve what happened to me, nobody does.

I don’t feel like any of them got a big enough sentence – the judge took too much pity on her husband by giving him a suspended sentence just because he had kids to look after.

Where is the justice? They could have taken my life away from me, and I’m still not right after the attack. I get headaches and worry about stuff – I get paranoid and won’t go out on a night anymore.

I just hope that from watching this CCTV people will realise how serious the attack was and that the city finally gets to see what happened, and I hope it opens up people’s eyes to how serious an assault can be.

Guy probably has got a point to be honest, although it’s kinda weird that nobody is talking about why the fight started in the first place – maybe there’s something in that? Even despite that though I don’t think that anyone deserves to get as battered and beat up as he did. Wishing him some kind of recovery from his current troubles.

For more of the same, check out this daredevil grandma who sadly died after surfing on her stairlift. RIP.