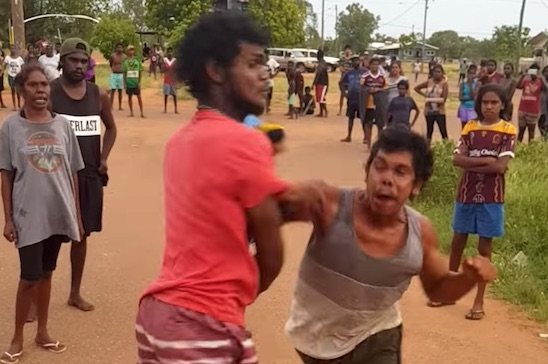 There’s always one guaranteed way to settle a beef you might have with someone and that’s by pummelling the tar out of them in the street.

It seems like this is becoming more and more of a recognised brand of justice all over the world now, so much so that events known as ‘fair fights’ are held where people can come along and check out the carnage. This is especially popular in the native Aboriginal families over in Queensland’s townships. In the below video, it looks like pretty much the whole town came out to watch this scrap that went on for seven minutes and ended up involving several family members including the elderly women. Really is something else when it all starts to break down around four minutes:

I mean what the hell is going on there when they all just start fighting each other willy nilly all over the place? The two women were trying to break it up and then just decide to get bang into it with a couple of other old ladies as well? And who are the other two guys fighting? Guess stuff really is a bit backward when it comes to settling beef over there with aboriginals eh?

For more of the same, here’s a street beef fight from Richmond, Virginia. Slightly more traditional.